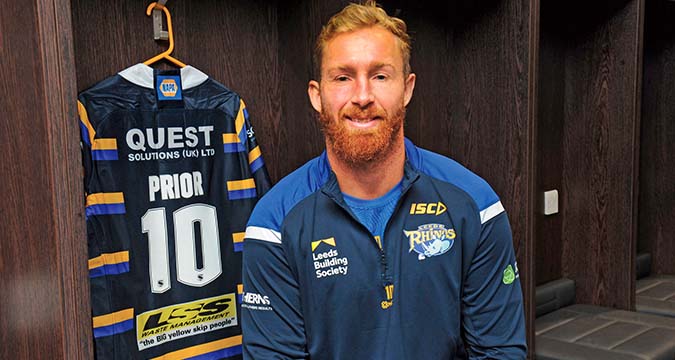 Leeds Rhinos are keen to keep Matt Prior.

The Australian, signed from Cronulla ahead of last season, has been in impressive form as one of the stand-out players in the Rhinos pack.

His contract expires at the end of this year, but crucially, the club has a year’s extension option.

And coach Richard Agar, who is contemplating a second successive Covid-enforced postponement with Saturday’s away date with Catalans in doubt after the home clash against St Helens was called off, told League Express they have informed the 34-year-old former New South Wales star they are keen to make a final decision in the next month.

“We’ve got an option on Matty, and I think we’re pretty keen to take it on,” said Agar.

“It’s fair to say Matty is enjoying his rugby at the moment, and we’re relaxed about it.

“He’s very laid back about where he’s at, and all we’ve asked of him is if he can let us know his thoughts over the next few weeks or so.

“Because if things change, we’ve got an important position there and some decent cap space to boot.

“We’re not panicking though, because if we were to fill that position from overseas we’d be confident we could, but the club and Matty are in a really good dialogue.

“As far as I’m concerned, there’s no real stress. As I say, we’ve got the option on him, and we’re keen.”

Agar also offered an update on the club’s recruitment and retention plans for 2022 and beyond, saying: “Things are always ongoing.

“Are we on the cusp of signing someone right now? No. Are we speaking to two or three players and their agents at a fairly in-depth level about the potential of signing next season? Yes.

“The market gets earlier and earlier – and by round six and seven over here, English players are wanting to know what they’re doing next season. So it’s all moving along as we speak.”

However, Agar once again insisted that there were no plans to sign anyone mid-season – particularly an overseas player, given how they have no remaining spots on the quota.

“We’ve got no quota spots spare and salary-cap wise, there’s not an abundance. But most importantly of all, we’ve got a lot of confidence in our squad.”

Friday’s scheduled clash with Saints was postponed after two Leeds players tested Covid positive while seven had to isolate through track and trace.

After another four Covid cased were announced on Saturday, the RFL’s multiple case group ordered a five-day training-ground closure.