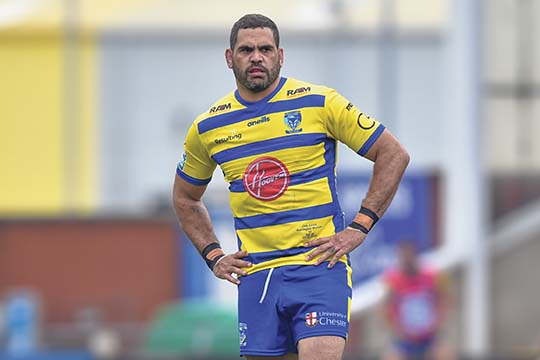 Warrington Wolves have confirmed that Aussie superstar Greg Inglis has been released from his playing contract with immediate effect.

The hamstring injury Inglis sustained in the Super League Round 7 contest against Huddersfield Giants has proven worse than initially thought and has subsequently ruled him out for a prolonged period.

Following “amicable discussions” the club and Inglis have come to a mutual agreement to terminate his playing contract.

But that doesn’t mean he will return to Australia immediately.

Instead he will stay with the club in a voluntary mentoring role for the remainder of the campaign, while assisting with the club’s performance and Academy squads.

“Greg’s influence on the playing group and staff has been outstanding since moving to the UK in January and he has everyone at the Club’s full support in the next phase of his career,” said a statement issued by the club.

Greg Inglis said: “It’s unfortunate that it’s come to this, but the injury is worse than we originally thought.

“Not too many people get the opportunity and the experience to come over here to the UK and play in Super League, especially at my age, and I want to thank Warrington for the opportunity.

“I’ve got nothing but high praise for the club. They’ve been nothing but good to me and my partner and made us feel welcome from minute one. It’s not just the team, it’s the organisation as well that’s done a lot for us.

“I’ll remain here at Warrington as a volunteer in a mentor role helping the young lads coming through as well as being around the club itself and the team to assist in any way I can.

“I said from the start that I wanted to add value to this club and that’s what I’m still firmly focused on now.”

Warrington CEO Karl Fitzpatrick added: “Although we would have liked to have seen Greg in action more, he has brought tremendous value to our organisation with his leadership qualities and in driving club standards.

“It’s testament to his character that he wishes to remain in Warrington until the end of the season to continue to support the playing group and to mentor a number of our young players.”