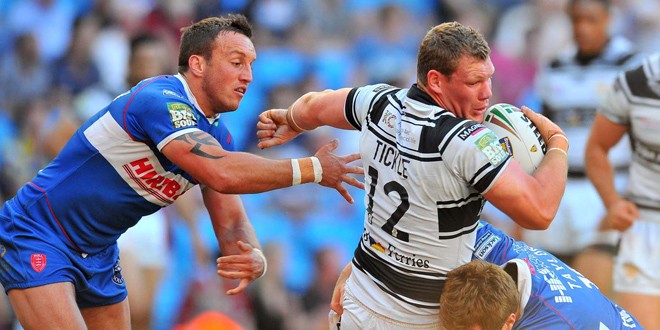 2007
Sunday 6 May, at the Millennium Stadium
BRADFORD BULLS 38 LEEDS RHINOS 42
There could not have been a more dramatic conclusion to the inaugural Millennium Magic weekend. With the clock having run down on a points-fest of a final game, Kevin Sinfield’s 40-metre penalty struck the woodwork and substitute Jordan Tansey plunged over under the posts for one of the most controversial wins in Super League history.

Controversial because the penalty should never have been awarded in the first place. Bradford second-rower Matt Cook had been penalised for picking the ball up in an offside position, but replays revealed the ball had actually come off a Rhinos boot, rather than Iestyn Harris.

And while the initial feeling was that Tansey should be applauded roundly for his remarkable effort at the death, showing tremendous desire to win the race to the ball, further replays revealed that he was at least five metres in front of the ball when it was kicked. Referee Steve Ganson decided not to go to the video referee for the ninth time and immediately awarded the try.

2007
Saturday 5 May at the Millennium Stadium
HULL FC 10 HULL KINGSTON ROVERS 14
The 200th Hull and Rovers derby was a triumph for the Robins.
It was their 89th win, and their first since 1997. There had been a lot of hype about Paul Cooke facing his old Hull FC team so soon after his controversial cross-city move, but fears that things could turn nasty never materialised. There were a few jeers early on, but the stand-off soon silenced them as his typical kick through brought a try for Makali Aizue after only four minutes. Cooke popped over the goal, added a 20th minute penalty, and Rovers never looked back, as they dug in to end a run of eight successive Cup and League defeats.

Only a few weeks ago Cooke had been the architect of Hull’s win over Rovers, and now he was to play a significant role in the Airlie Birds’ defeat. He also had a hand in Rovers’ other try, combining with Stanley Gene to send in Ben Cockayne. Add three all-important goals, and Cooke’s contribution to victory was considerable.
Rovers were 14-0 up after 24 minutes, and though they never scored again the lead always looked to be too much for Hull, who failed to raise their game. Hull did manage to hit back, though, with a couple of tries to put Rovers under pressure and give their coach an anxious last 40 minutes.

As for Cooke, the script writer had dictated that he would drop the opening kick-off. A lesser man would have wanted the ground to open up, as the cliché goes, but Cooke is made of strong stuff, and he came through the toughest game of his life with flying colours. The Hull FC boos quietened after about 20 minutes as it was clear the Robins had the ascendancy. The greatest moment of Cooke’s career came in this stadium in 2005 in that year’s Challenge Cup Final, when he scored the winning try.
When he looks back on his career, he should rank the Millennium Magic weekend just as highly, given the events of the last two weeks.
Hopefully a line has now been drawn under the whole affair, and Cooke can get on with his career

2010
Saturday 1 May at Murrayfield, Edinburgh
BRADFORD BULLS 0 CRUSADERS RL 19
A first-half Michael Witt masterclass, coupled with a sensational second-half debut from his new halfback partner Jarrod Sammut, laid the platform for Crusaders to overwhelm the Super League’s recent form team in a surprisingly one-sided opening to Murrayfield Magic.
The rapidly emerging Wrexham-based outfit arrived in Scotland with just one win in their previous four encounters while the Bulls came in search of a fourth successive victory.

But form book was quickly turned upside down, with Brian Noble’s current charges rarely being troubled by the West Yorkshire side that had been such a big part of his career, both as a player and coach.
Witt emerged with 15 points from two tries, three goals and a field goal, while fellow Australian Sammut, barely 48 hours after landing in the UK, added the other four through a dazzling touchdown at the end of an eye-catching 45-minute debut.

To complete a wonderful day for the Welsh side Sammut, who had shown few signs of jet-lag and already posed a constant threat, juggled a Weller Hauraki pass into his grasp, then kicked over the head of Crookes and embarked in a race to the line.
The bounce was fortuitous for the Aussie live-wire who re-gathered and sparked joyous celebrations as he rolled across the whitewash for his maiden Super League try.

2011
Sunday 13 February, at Millennium Stadium, Cardiff
CRUSADERS 42 SALFORD CITY REDS 12
Mickey Rourke watched from the stands as Iestyn Harris’ Super League coaching career got off to a perfect start.
But this was no Hollywood thriller, as Salford miserably struggled to live up to their pre-season hype.

Crusaders ran in seven tries – including a hat-trick for Michael Witt and Stuart Reardon’s brace – in an ultimately one-sided affair.
For parts of the first half Salford looked competent and capable of matching the Welshmen.

But with Joe Calzaghe watching alongside Rourke in a Millennium Stadium hospitality box, Crusaders showed that they knew how to deliver their own knockout blows.

Salford’s afternoon was made even worse with Wayne Godwin’s 80th minute sending off. The former Bradford hooker clobbered Clinton Schifcofske from behind as the Crusaders fullback squared up to Chris Nero. Reds coach Shaun McRae

2012
Sunday 27 May at the Etihad Stadium, Manchester
HULL FC 30 HULL KR 32
Hull KR won the 216th Hull derby with a passage of play that epitomised the changing of belief on the east side of Hull, with David Hodgson’s composure and conviction enabling him to score the spectacular winning try in a game that wasn’t without controversy.

The game was an extremely tight and intense affair but FC looked to have clinched it with Jordan Turner’s try on 66 minutes leaving the score at 30-16. However, the Robins came back with three tries in the final 12 minutes to win the match, with a few slices of luck before Hodgson’s winner.

First, in the build-up to Rovers’ first comeback try, Tony Martin was down injured. Then the pass for Michael Dobson’s score after that was forward. However, those moments were countered by a debatable drop-out call against KR, with the video ref ruling Shannon McDonnell had taken the ball out of play with Briscoe in attention, which had helped FC establish the late lead.

However, the game then looked sealed with a fine time-sapping kick from Richard Horne into the corner left the Robins packing a scrum with one minute and 48 seconds remaining, and KR on their own ten metre line. But Rovers showed yet again their sleight of hand to give Hodgson the ball on the left side of the field, with 60 metres between him and the tryline. Hull born Hodgson then showed evasive movement to step past Seymour, and great composure and belief to round Sharp for an outstanding game-clinching try to complete his brace.

The Robins moved the ball quickly to the left, and the crucial pass was a superb flick from Shannon McDonnell to Kris Welham. The centre handed on to Hodgson, but the try still needed plenty of scoring. With smart footwork, Hodgson got outside Will Sharp, and, once he did, he was always going to snatch the game away from the black and whites.

2013
Saturday 25 May at the Etihad Stadium, Manchester
HULL FC 22 HULL KR 16
Hull FC ended their Magic Weekend curse against city rivals Hull KR on Saturday evening with their first win in five attempts due to a massive slice of luck courtesy of video referee Steve Ganson, which made it a tragic weekend for Rovers fans.

Despite FC’s early try through Richard Whiting, Rovers dominated the first half, with great guidance by Michael Dobson helping them to a 10-6 half-time lead, before they crossed again through Alex Brown after the break.

From that point on the Airlie Birds dominated and finally found their spark to score two tries in four minutes to level the game late on. Then Danny Houghton’s high bomb wasn’t dealt with by Greg Eden and Chris Green collected to score the winning try in dramatic fashion.

However, Ganson gave the try despite replays clearly showing try-scorer Green was at least three metres ahead of Houghton. KR should have been given a penalty 47 metres out from goal for Dobson’s possible attempt at a late winning kick.

This feature originally appeared in the May 2014 issue of Rugby League World magazine. Find out more about the UK’s biggest-selling Rugby League monthly by clicking here.