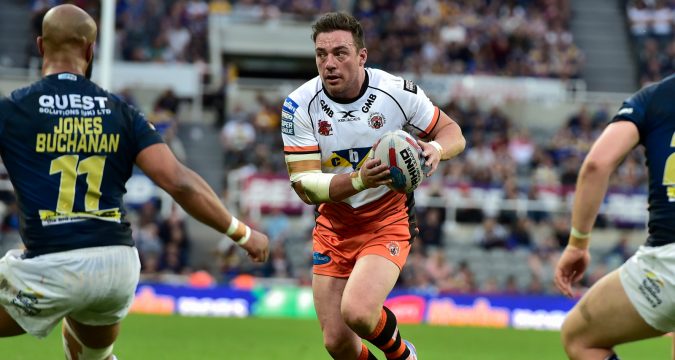 Grant Millington has admitted his time at Castleford would be a failure if the club fails to win a major trophy.

Millington and the Tigers are still in the mix for this season’s Grand Final, after defeating Warrington 14-12 on Thursday night to set up a tie with Salford Red Devils this Thursday night.

And the veteran forward told League Express that he sees no reason why this cannot be the year when Castleford end their wait for a major piece of silverware.

He said: “As a leadership group we’re here to win something. And this year there’s no reason why we can’t do it. It will be a tough job and we’ve had a tough year with injuries, but that’s no excuse. We still believe we’ve got the squad that can do something.”

Millington insists Castleford have learned from their agonising defeat in the 2017 Grand Final. But he also believes that the tag of outsiders many have given the Tigers is one that could benefit them.

“We came to Warrington as underdogs and that’s a tag that will probably suit us,” he said.

“Nobody expected us to do anything and we’ve come to Warrington and done well. We’re not getting ahead of ourselves that we’ve done the job because there’s still plenty to do. We’ll come back in, re-assess and go again.

“There’s no pressure on us. Other sides have been dominant and more consistent throughout the year and they’ve earned the right to be favourites. It’s up to us to come in with great performances and upset them.”

Millington is 33 in November, but will still be at the Tigers next season, where he is already being mentioned as one of the club’s greatest overseas imports.

He has struggled with his fitness at various stages this year, but insists his body is still up to the task of playing at the highest level for a while yet, as well as admitting he feels as settled as ever with life in England alongside his wife Amy and his young family.

“When I got here at 24 I would have been happy if the body held out for another three years. It’s kept plugging along and I’m happy with the way I’m going.

“We were initially coming over for two years to experience a bit of the world and go home and do a bit of local coaching. But it’s been nine years now. It’s crazy, we’ve got two kids and another on the way in October.

“It’s home now and if it was just Amy and me we’d stay here. But with the kids now it’s the hardest part, keeping them away form their grandparents, uncles and cousins. We’ll eventually get home but we’ll be here for as long as the body holds out.”