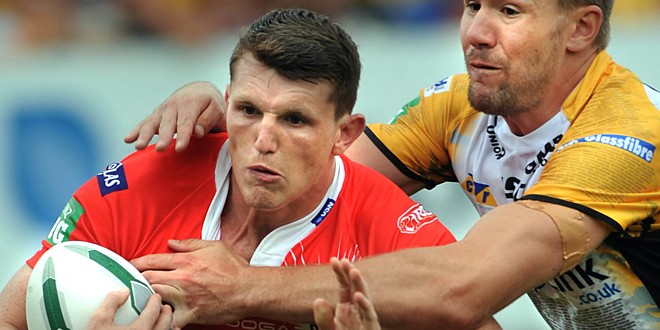 Bradford stand-off Lee Gaskell is set for up to 12 weeks on the sidelines after tearing his medial collateral ligament (MCL) in the Bulls’ round two win at Wakefield.

The 23-year-old follows in the footsteps of Larne Patrick and David Hodgson, who also picked up the injury in round one. Gaskell was about to embark on a peroid of regular first-team action following the exit of Jarrod Sammut to Wakefield last week, but now faces a lengthy lay-off. Danny Addy is expected to fill in at six.

“We are bitterly disappointed for Lee, it is a big blow for us and that goes with saying,” said Bulls coach Francis Cummins.

“Injuries are very much part and parcel of our sport and Lee has been very unlucky, getting injured from the kick-off – in only the second game of the season.

“However, on a positive note, we have a great medical team in place here and I know he is in good hands.

“With the right type of rehabilitation, I am confident he will be back in time to complete the majority of our campaign.”

“We are aiming to have Lee back in eight weeks, that is the plan but these things can take time,” he said.

“His brace will be fixed at a 30-degree angle for seven to eleven days, with us then gradually moving it.

“After a month it will come off and the rehabilitation period will begin.

“We are hopeful of a pain-free recovery for Lee, before getting him back into running and skills.

“The final stage will be full contact and I believe he has a great chance of making a speedy recovery, given his age and fitness levels.”