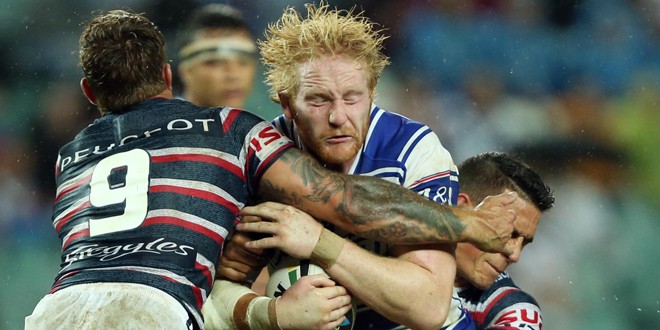 How it unfolded
5’ – Roosters hooker Jake Friend (pictured tackling James Graham above) has a try ruled out by the video referee.

11’ – After three consecutive sets thanks to penalties and errors, Chase Stanley scores for the Bulldogs, finishing off a great back-line move. Hodkinson converts: 6-0.

32’ – Michael Jennings, who scored a hat-trick against Wigan in the World Club Challenge, goes over for the Roosters. James Maloney converts: 8-6.

39’ – Bulldogs concede from close range but Roosters don’t have enough time to run the ball so take the two. Maloney lands the penalty to tie the scores: 8-8.

56’ – Daniel Tupou has a try disallowed thanks to great cover defence from Josh Reynolds.

68’ – Roosters get penalty on Bulldogs line and take a tap. Maloney goes for the one-pointer but misses.

For an in-depth report, stats and images, pick up Monday’s League Express newspaper