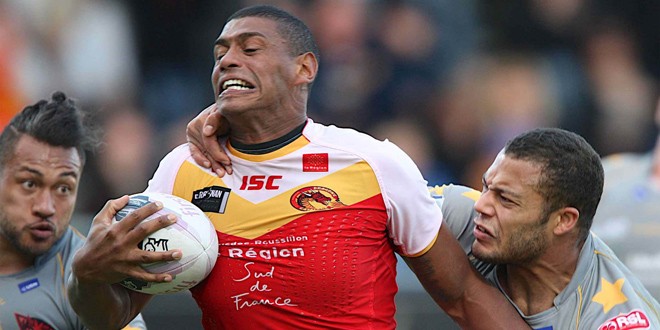 In a nutshell
Morgan Escaré scored three tries for the Dragons as they won an entertaining game at the Stade Gilbert Brutus.

How it unfolded
Escaré scored his first try in the first minute, with Daryl Millard adding a second try six minutes later, and William Barthau converting the first.

And Escaré got the Dragons’ third try after 19 minutes, after a dash downfield, with Barthau again converting, putting his side 16-0 ahead.

But then the Red Devils began to fight back, which occurred after Escaré and Millard were both stunned in a collision.

Great play by Gareth Hock created a try for Francis Meli, while the other winger Danny Williams added a second on 29 minutes and Greg Eden scored just before the interval. Tim Smith converted all the Red Devils’ tries to give them a two-point interval lead.

Four minutes into the second half, the Dragons took the lead again with a try from Zeb Taia, converted again by Barthau, but the Red Devils replied quickly when Chase’s cleverly disguised pass created a superb try for Gareth Hock.

But the Dragons refused to lie down, and Leon Pryce followed up a Julian Bousquet break for another long distance try to give them a 28-24 lead after 63 minutes.

Barthau then added a penalty to stretch the Dragons’ advantage to six points, and the decisive try came after 70 minutes when Escaré added his third try of the afternoon, with Barthau’s conversion making the final score 36-24.

Elio Pelissier completed the scoring when he landed a field-goal to the jubilation of the Dragons’ supporters, who had seen their fifth consecutive home win.

Want more Rugby League news and features? Subscribe to the online version of League Express newspaper and Rugby League World magazine. You can also connect with Total Rugby League on the social media platform of your choice