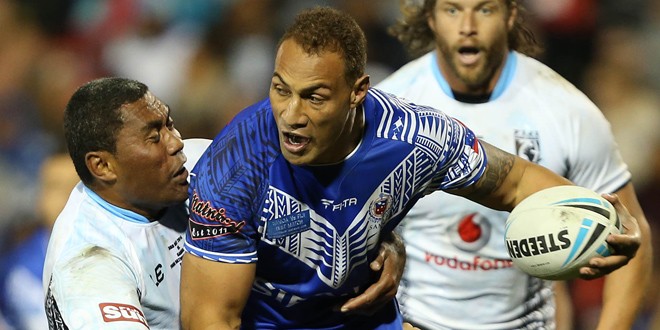 In a nutshell
Penani Manumalealii of the Cronulla Sharks scored a hat-trick of tries as the Samoans qualified for this season’s Four Nations tournament by beating Fiji in he Pacific Test at Penrith’s SportingBet Stadium in front of 9,063 spectators.

How it unfolded
The Samoans too the lead after 13 minutes when Manumalealii scored his first try. Krisnan Inu added the first of his six goals.

The Fijians were quickly back in the game three minutes later, however, when Kevin Naiqama touched down with Lote Tuqiri adding the conversion.

And they took what appeared to be a stranglehold on the game when James Storer and Tuqiri both scored tries, with Tuqiri converting the first to give them a 10-point lead.

But the Fijians suffered a blow when they last halfback Aaron Groom, who had to leave the field with concussion after a head clash with Samoa’s Dominique Peyroux.

The Samoans got back onto the game just before half-time, when Manumalealii scored his second try, with Inu’s conversion reducing the margin to four points.

The second half was all Samoa.

They hit the front after 44 minutes when Manumalealii scored his hat-trick try, with Inu again converting. And Inu added a penalty soon afterwards for a Korbin Sims shoulder charge.

The Fijians fought back, but when Tuqiri had a try disallowed by the video referee it spelt curtains for their Four Nations ambitions.

Sam Tagateese was dismissed shortly before the end of the game for a headbutt as the Samoans and their supporters began to celebrate their success.

Their next game will be against England at Brisbane’s Suncorp Stadium in October.