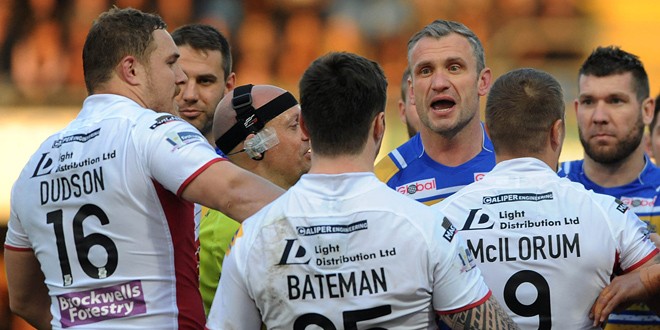 In a nutshell
Zak Hardaker had an outstanding game for the Rhinos as they convincingly defeated a Wigan side without their captain Sean O’Loughlin.

How it unfolded
The Rhinos took the lead after 90 seconds, when Danny McGuire touched down a Kevin Sinfield kick that ws knocked back by Ryan Hall. Sinfield converted.

Zak Hardaker extended the Rhinos’ lead after 15 minutes with a superb try in the corner, with Sinfield missing the conversion.

Tony Clubb opened Wigan’s account when he picked up the ball two metres from the Leeds line from a quick play-the-ball by Michael McIlorum. Matty Smith’s goal reduced the gap to four points.

Tom Briscoe got Leeds back on the scoreboard on 35 minutes, in a try that was made by Hardaker and Kallum Watkins combining, and Sinfield converted superbly from the touchlin.

The Rhinos extended their lead early in the second half when Hall touched down a grubber from Joel Moon, and Sinfield added another touchline conversion.

Wigan added a consolation try four minutes from the end when Scott Taylor touched down from dummy-half, with the video referee awarding it and Smith adding the goal.

But Leeds weren’t finished, and they ran a penalty to create a try for Liam Sutcliffe, with Sinfield rounding off the scoring with his final goal of the night.

Want more Rugby League news and features? Subscribe to the online version of League Express newspaper and Rugby League World magazine. You can also connect with Total Rugby League on the social media platform of your choice