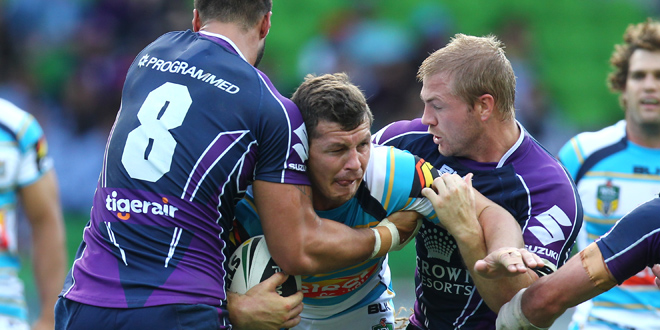 In a Nutshell
The Titans went to the top of the NRL Premiership with a controversial defeat of Melbourne Storm through a disputed late penalty given when the Storm were adjudged to have stripped the ball from Titans prop Luke Douglas.

How it unfolded
The Storm took an early lead through a converted try by Sisa Waqa, but the Titans replied through two unconverted tries by Kevin Gordon and David Mead.

But Waqa scored his second try, again converted by Cameron Smith, to put the Storm four points ahead after 25 minutes.

But the Storm couldn’t shake off the enthusiastic Titans, and Mead scored his second try, this time converted by Greg Bird, to give the Titans a two-point advantage at half-time.

They extended their lead when Albert Kelly scored a converted intercept try early in the second half, but the Storm replied through Kenny Bromwich for another converted try.

But again the Titans extended their lead, this time through Mark Minichiello, and Bird again converted for the Titans to lead 18-26 after 55 minutes.

But the Storm got back on terms with a converted try by Will Chambers and a penalty for an illegal tackle on Chambers. The scores were level going into the final ten minutes until that controversial penalty that sealed it for the Titans.

A full review of all the NRL’s weekend games will appear in Monday’s Rugby League Express, available in the shops and online from 11.00pm Sunday night UK time.