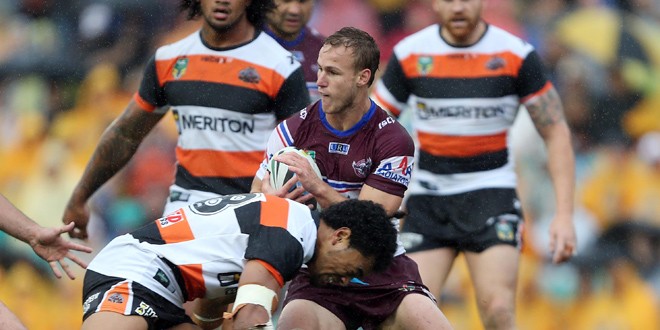 In a Nutshell
The Tigers dominated a game that was played at their old stomping ground, the Leichardt Oval, and the Sea Eagles were beaten in all aspects of the game, scoring two late tries to give the scoreline a more respectable look.

How it unfolded
The Tigers took the lead in the eighth minute with a try by captain Robbie Farah, and from that point they never looked back, scoring four more through David Nofoaluma, Chris Lawrence, Aaron Woods and Nofoaluma again. Pat Richards added five conversions and two penalties.

Manly replied with tries by Jamie Lyon and two from Steve Matai, with Lyon adding both conversions.

The only concern for the Tigers was an injury to winger James Tedesco, who succumbed to an ankle injury in the first half. He came out for the second half but eventually had to be withdrawn.

A full review of all the weekend’s NRL matches will appear in Monday’s Rugby League Express, available in the shops and online on Sunday evening from 11.00pm UK time.