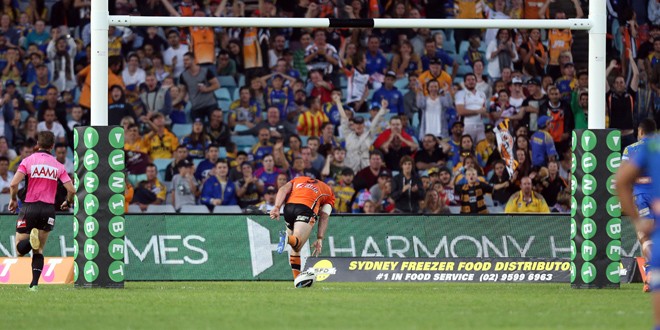 In a nutshell
A Pat Richards penalty from half-way, plus a field-goal from Luke Brooks, helped Wests edge the Eels 18-21 in a thrilling Easter encounter in front of a record-breaking crowd of 50,668.

How it unfolded
9’ – Australian international Jarryd Hayne opens the scoring for the Eels with a well-taken try, which wasn’t converted: 4-0.

39’ – Blake Austin, an inexperienced Tigers reserve, gets one back for the Wests, former Wigan man Pat Richards getting his side to within two with his boot: 8-6

46’ – The first score of the second half was key and it went to Tigers half-back Luke Brooks. Richards was again on hand to land the extras and put Wests four points in front: 8-12

51’ – Eels winger Ken Sio levels the scores with a well-taken four-pointer. Chris Sandow lands his first conversion of the day to give Parramatta a slim lead: 14-12

64’ – Richards makes yet another major contribution, intercepting the ball and racing under the sticks (pictured above) to improve his State of Origin chances further. He added the extras, too: 14-18.

76’ – Semi Radradra levels the scores with just four minutes left but Sandow can’t put the Eels in front. Yet another costly miss: 18-18.

79’ – Richards successfully converts a penalty goal from the half-way line: 18-21.