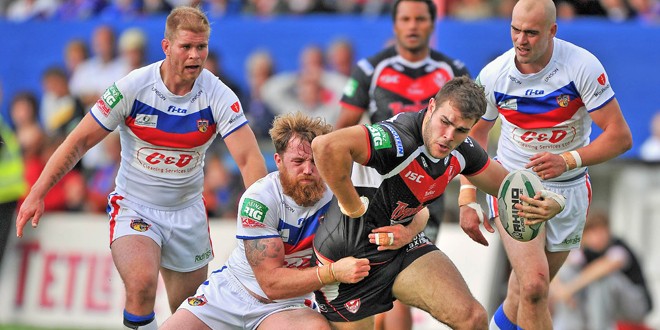 In a nutshell
Despite a spirited effort, Wakefield Wildcats failed to end St Helens’ unbeaten start to the season. Three tries in six minutes from the table-toppers was enough to overturn an early Wildcats lead.

How it unfolded
First half: Wakefield start the stronger side but both teams fail to register a point in first quarter; Saints draw first blood on 23rd minute with Josh Jones completing a move involving Amor, Lomax and Makinson; Wildcats hit back on the half hour mark thanks to a good combination between Paul McShane and Matt Ryan, Captain Danny Kirmond scores; Sammut misses conversion but puts in Reece Lyne minutes later to give Wildcats the lead; HT: 10-4.

Second half: Paul McShane sells the Saints defence a dummy two minutes into the second half to put the home side 12 points clear; St Helens hit back, though, thanks to Iosia Soliola, who is assisted by Paul Wellens; Wellens in on the act again on 55 minutes when he chips through to set up a Matty Dawson try; two minutes later, Jon Wilkin sets up Joe Greenwood to give Saints the lead; Saints score third try in six minutes thanks to a Jon Wilkin kick that Makinson collects like a leaping salmon; FT: 16-24.