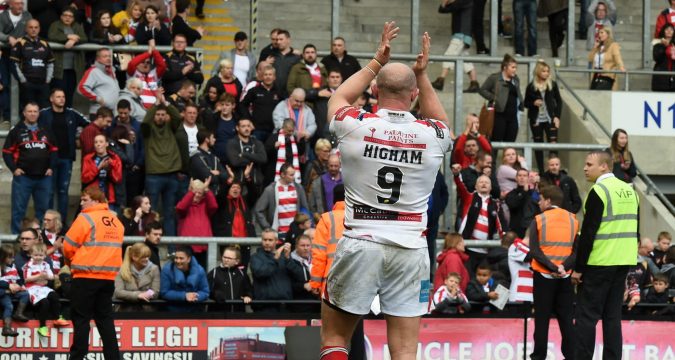 It becomes quickly apparent that Micky Higham is not ready to hang up the boots.

There are a few pointers that make this apparent. The deep sigh of breath when his final game is brought up, the long gaze into the distance as he discusses retirement, the frequent slouching of the shoulders when he discusses life away from the field.

His body language, his tone of voice, the things he has to say, all suggest this is a man reluctant to draw a line in the sand and start a new life.

It doesn’t take long for him to admit it.

“I won’t deny it, I thought I could go around again,” he declares with an adamancy in his tone.

“I thought I could be an experienced head that you need in a team, that knows about Leigh and how the club is.

“You’ve got 19 new lads and they’ll soon find out what Leigh’s about because it’s a rugby-mad town, but I thought I could have a hand that way.”

But Higham, one of Britain’s most ardent sporting warriors of the last 18 years, has never really known when to quit. It’s what has made him one of the most well-respected players of his generation. He considered leaving Leigh to pursue one last roll of the dice. In the end, it was only those around him that pulled him back.

“I thought about making a few calls to other clubs,” he said.

“I sat down and had a good chat with family and I kind of weighed it up. It was decided for the sake of a year it wasn’t a good idea.”

That said, deep down, there’s a part of Higham that is still holding out for one more game, one last run.

“Never say never,” was his response when asked if he’d consider a return if necessary.

“Derek said to me that if they came knocking he was sure I’d play. I told him he knew me well enough to know that I would.

“I’ll keep ticking over on the off chance they might call upon the old legs for a couple of games. If they do come we’ll have a good chat and you never know.”

It’s that mentality that makes it impossible not to admire Higham, but also feel a great deal of sympathy for him.

His passion is unwavering, the likelihood is that it will never wane. But it has left him holding onto a small glimmer of hope, like a young supporter who takes his boots to the game, just in case.

For now, Higham will try and step away from the lifestyle of a rugby player. It’s a challenge many find difficult to overcome. You get the impression Higham will find it more frustrating than most.

“I’m kind of enjoying the job with the community.”

Higham has started to coach within the community for the club.

“Seeing some young kids get a rugby ball in their hand and develop is quite rewarding. It’s not rugby, I’ll admit, it’s not playing and doing what I do. It’s a great job, but I’m still getting used to not being a rugby player.