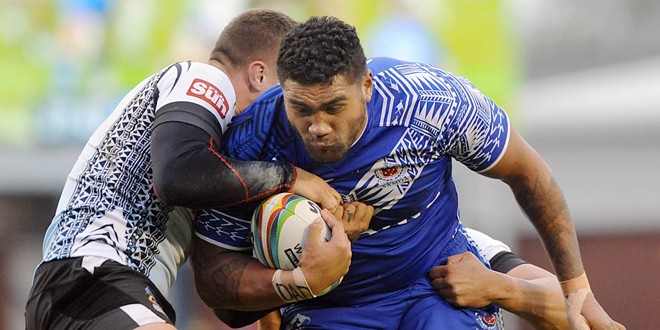 Samoan St Helens prop Mose Masoe can’t wait to get his Super League career underway, and claims he could return from an ankle operation as early as round three.

The 6ft 3in powerhouse, 24, weighs nearly 19 stones and arrived from Penrith Panthers in the off-season.

He said: “The hardest thing [about being in the UK] is adapting to the cold!

“I was used to it from the World Cup but it was a big shock for my partner and kids.

“Everything is going well, I’m in rehab at the moment so I haven’t been able to train but all the boys have been pretty welcoming.

“I can’t wait, hopefully I will be back for round three but if I have to put it back a week and make it round four, it’s better to be safe.”

When asked if he plans to be a similar player to the one that devastated NRL defences in his Sydney Roosters and Penrith days (see the video below), Masoe said: “No, the boys over here look a lot bigger than the guys in the NRL so I might just tackle them normally!

“I think over here it is more of a forwards game, you can get your hands on the ball pretty early and try be dominant in the middle.”

The following video is a compilation of some of Masoe’s biggest tackles and hit-ups.