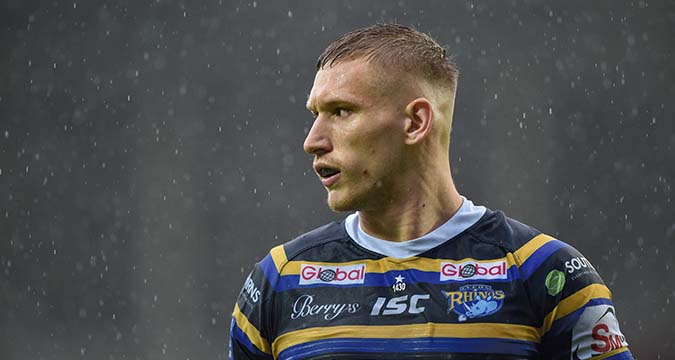 Leeds Rhinos forward Mikolaj Oledzki is only the second Polish-born player to appear in Super League, having made his debut in 2017, 21 years after his predecessor, Greg Kacala, played for Paris St Germain against Sheffield Eagles in the very first Super League match in 1996 at the Charlety Stadium in Paris.

Like Oledzki, Kacala was a prop forward, but unlike his successor, he only lasted one season in Super League, playing seven games and scoring one try before reverting to rugby union.

“I had thought that I was the first, so I’ll look back at Greg’s record,” says Oledzki, who takes great pride in his Polish heritage.

Although precise records are unclear, it is likely that Oledzki, who will wear the number 8 shirt for Leeds this season, was the first Polish-born player to appear in a Challenge Cup Final. And he was certainly the first to play in a Cup Final and win the trophy without a crowd in attendance.

So how strange was that?

“The Challenge Cup gave us a great experience, and created a hunger for more trophies and excitement for the coming season,” Oledzki tells League Express.

“It was my first time at Wembley, and it wasn’t strange for me, because I’ve never experienced Wembley in front of a packed house. The no-fans situation wasn’t on my mind. I just made sure I did my job right, and left Wembley with a trophy.

“I’m sure the boys who had played there before would have felt the lack of a crowd more than I did.

“And if it had been our first game, it would have felt weird. But playing in front of an empty stadium was normal by the time we got there.”

What that victory did do, however, was fuel a hunger among the Leeds players to win more trophies in 2021, although they are hoping they will be able to do so in front of the Rhinos’ supporters.

“This season we are equally desperate to win both the Challenge Cup and the Super League Grand Final as well as the League Leaders’ Shield,” he says.

“Competing for every trophy is our aim throughout the whole season, hopefully in front of our supporters.

“Our fans are amazing. We have a great fanbase and the atmosphere on Friday nights at Headingley gives us an extra bit of motivation.

“It was a shame that Covid took over last March, but hopefully now with the vaccination rollout everyone will be back at the stadium in no time.”

Oledzki has been given the number 8 squad number this season and he recognises the significance of his promotion into top 13 squad numbers.

“At Leeds, squad numbers have always been a respected kind of symbol,” says Oledzki.

“Some of the players who have worn 8 and 10 are legends and I am really honoured to be given that shirt by Richard (Agar). I want to show that I deserve to wear it, because when you receive one of those shirts, you can lose it as soon as you got it.

“But luckily I have a great pack around me so the pressure is not as heavy as you might imagine.

“I play my best rugby when I concentrate on my own game and play with a smile on my face. I just want to enjoy my rugby and be a dominant force for Leeds. As a player born in Poland I’ve had a few firsts and hopefully I’ll add to them.”