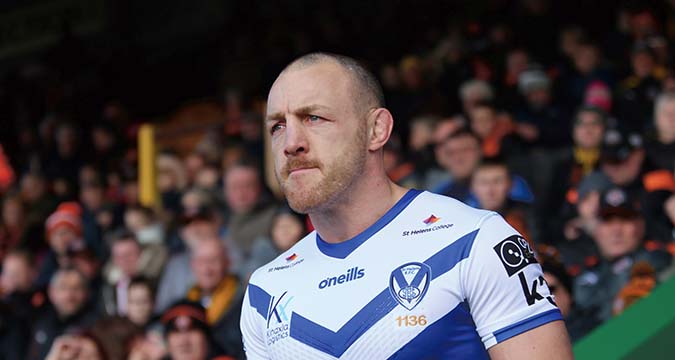 When James Graham and Sean O’Loughlin hung up their boots in the wake of last year’s unforgettable Grand Final, it raised inevitable questions about their long-term peer James Roby.

The 35-year-old St Helens captain played alongside Graham from their childhood days and against O’Loughlin in countless derby clashes.

This season Roby will be the third oldest player in Super League, but he is not rushing into a decision on his own future.

“I’m a realist – I’m not stupid in that I know that time is coming, whether that is the end of this year or potentially the end of next,” says Roby.

“I’ve got this year on my deal and we’ll just have to see how it goes.

“I’m pretty relaxed about it and want to enjoy my rugby and appreciate how lucky we are to be Rugby League players.

“It’s a bit of a cliché, but it’s all we dreamt of doing when we were kids.

“I’ll see how the body feels and have a conversation with my wife, and it depends on whether I get offered another deal.

Roby believes he has benefited physically from last summer’s lockdown and an extended pre-season this year, adding to his relaxed stance on how long he will play on for.

And the prospect of appearing in a fourth World Cup of his distinguished career is also a consideration.

“We’ve got a long year ahead and I want to concentrate on playing as well as I can for St Helens,” he insists.

“But earning selection for England is in the back of my mind – it would definitely be my last chance to experience international rugby and I want to give it everything I can.

“I’ve played in the past three World Cups and it would be a fantastic way to maybe end my career, especially with the way England has been going for the last few years.

Being part of that would mean that Roby would play under a long-term club adversary in former Wigan coach Shaun Wane, but it he would relish the prospect.

“He’s an honest bloke and says it how it is and I like that about him.

“We’re all established players and grown men and you have to take some criticism as much as the positives.

“I know fans might only see that side of him that wants to win at all costs, and there is that hostility between Wigan and Saints.

“But I’ve got a lot of respect for him and I’m sure he’s welcome in St Helens now.”