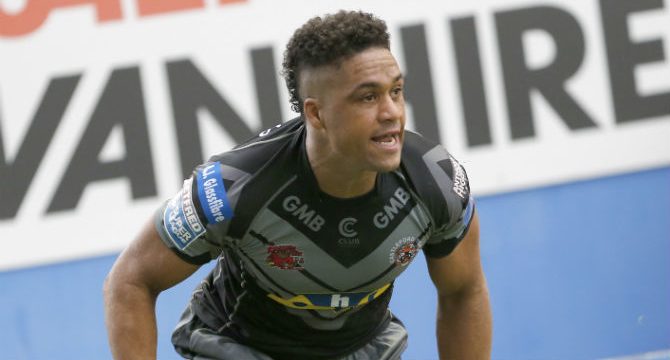 Starting in the Championship is hard enough, but for Derrell Olpherts, it was League 1 where he made his name, despite starting out at Dewsbury.

And it was Rugby League that helped him as a youngster.

“I was about seven or eight years old when my mum took me and my brother up to Westgate Redoubt,” he explained.

“It was my local rugby club, which was just up the road from my home in Lupset, so that’s where it started for me.

“I never looked back and I loved it from there and it kept me out of trouble.”

Whilst plying his trade with Newcastle Thunder in the third tier, Olpherts impressed so much that he attracted the attention of Super League club Salford.

“I knew I had the ability to play at a higher level, but I never thought I was going to go from League 1 straight into Super League,” he added.

“I had only been back playing professionally two years when some Super League clubs started showing interest in me.

“I couldn’t believe it at first; it was something I had dreamed of and it was becoming reality.

“I cannot thank Salford and Ian Watson enough for giving me an opportunity because it changed my life.”

After 16 tries in 42 appearances, the winger made the move to Castleford, but few saw Olpherts as a player who would make the matchday 17, a view that Olpherts himself was determined to prove wrong.

“I was grateful that Castleford were interested in me; they’d been one of the dominant teams in Super League in the past few years, so I was more than happy to sign with them, plus it is a stone’s throw away from my home town.

“I don’t think many people expected me to play at Castleford, never mind be given the number two shirt.

“But that was the goal I set myself coming into pre-season – to do everything I could to get a starting spot in the team.

“I worked hard for it and ensured I did a lot of extra work; Powelly (Daryl Powell), Chez (Ryan Sheridan) and Dan (Danny Orr) and the strength and conditioning coaches worked hard with me to develop my game.

“My goals are same as last year; I need to keep working hard, listen to the coaches and keep developing myself to become a better player.”