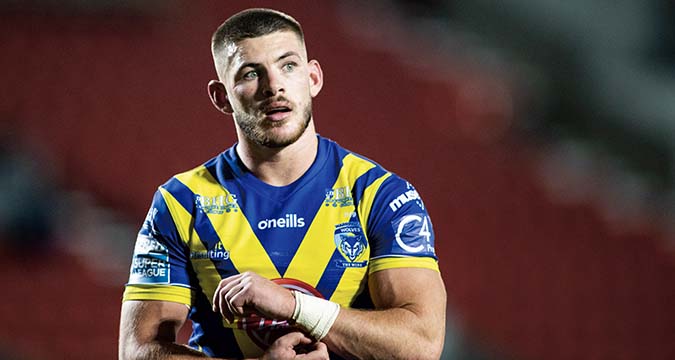 Warrington coach Steve Price says his successor Daryl Powell will have a great young hooker to work with in Danny Walker.

The 22-year-old, who joined his hometown club from Widnes in 2019, has agreed a contract extension to cover next year.

Walker, who made his 39th appearance in Wednesday’s 40-14 Super League win at Wigan, played for Warrington sides Crosfields and Rylands as a junior.

And Price, who will return to Australia at the end of this season, said: “It’s exciting news. He’s a local lad who I know loves representing his hometown club.

“Ever since joining, his performances and attitude have been first class and it’s been great to see his game develop.

“He adds great value to the playing group and is a tough guy to go with it. He’s been in some really good form of late and there’s plenty more to come from him.”

“I just want to keep building game by game and see where the future takes me. I want to get as many minutes as possible and keep trying to impress every time I get out there while enjoying my rugby, which is the main thing.

“I come down to the stadium with 4,000 fans and I probably know half of them! It means a lot to represent my hometown club and it was something I always wanted to do. Next year will be my fourth year of doing that so it’s exciting times ahead.”

While Walker will be on the books in 2022, winger Tom Lineham is set to depart and says he has had contact discussions with interested parties.

With Warrington set to follow their Monday (July 5) home game against Leeds with a trip to Hull KR on Sunday, the former Hull man added: “The best form of negotiating is by putting in good performances.”

Lineham, 28, who started out at York, also featured at Wigan and was praised by hat-trick ace Jake Mamo for his support play.

Price said of his team: “It was really some performance. I’m ecstatic for the boys. I’m pleased defensively. We hit a flat spot in the second half but we got the energy back.”

Meanwhile Australian legend Greg Inglis confirmed last week that he has retired from the game after playing only three games for the Wolves.

The hamstring injury sustained in the Super League Round 7 contest against Huddersfield Giants has proven worse than initially thought and has subsequently ruled him out for a prolonged period.

Inglis will stay in Warrington until the end of the season, however, acting as a mentor to some of the younger players at the club.