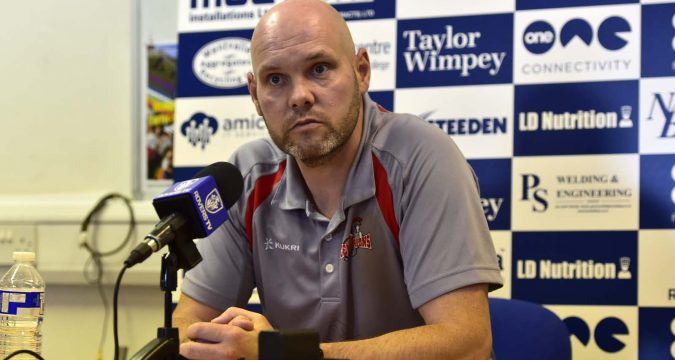 Leigh Centurions coach Kieron Purtill insists the club wasn’t “trying to pull the wool over anybody’s eyes” in revealing they only had nine fit men for Sunday’ Championship Shield final against Featherstone Rovers.

The club issued a statement outlining their position on Tuesday, before an agreement was reached by Championship and League One clubs to allow both the Centurions and Rovers to sign emergency loan players for the game to ensure they both had 17 in their matchday squads.

And Purtill, who used his own connections in the sport to make the signings, says the situation was every bit as serious as was outlined.

He explained: “We genuinely had 13 out of 25 players unavailable.

“Three of the remaining twelve were real doubts as well.

“We didn’t try to pull the wool over anybody’s eyes, we had been seriously hit by injuries.

“There have been some tough weeks at the club this year but that was as tough as any.

“On Tuesday we only had eight players on the field and we had to send the boys home because morale was really down.

“There were then some negotiations with the RFL and Featherstone and we came to a common-sense agreement.

“To have the prospect of just nine fit players and a couple who had put their hand up to play, even though they weren’t fit, was farcical

“One player is waiting for an operation and still offered to play, and certainly wouldn’t have been 100 per cent.

“It would have been a farcical situation if you were playing a final and both teams were struggling to get 13 men, never mind 17.

“Wednesday was then a busy day – it started off trying to put a game plan together to play with twelve men, and by the end of it, after a lot of running around and support from other clubs, we got to having 17 players at training on Thursday, which we hadn’t had in many weeks.

“I called a few favours in and the clubs were fantastic to us.

“The players trained with us and were a credit to each of those clubs, and I can’t thank them enough, because they came in and gave us a lift after a really bad time.

“I’d also like to thank the fans and spectators who have stuck by us, and all the people who got in touch and offered to play for free – there were some fantastic gestures.

“Hopefully now we’ve got all of that out of the way we can move towards the club securing its future.”

Last week saw the Centurions issue a detailed statement in which it admitted that six players who had not reached compromise agreements on their 2019 contracts had not been paid at the end of September, a move slammed on social media by the agents of those involved.

The re-negotiations are part of a financial restructuring at the club ahead of owner Derek Beaumont’s anticipated departure at the end of the campaign.

The statement read: “The club can confirm that, with the exception of the six players who have not accepted an offer, all personnel on field and off field were paid in full and on time.

“Rumours to the contrary are wholly incorrect and unfounded.

“Furthermore, the club is committed to immediately pay out any further offers that are accepted.”