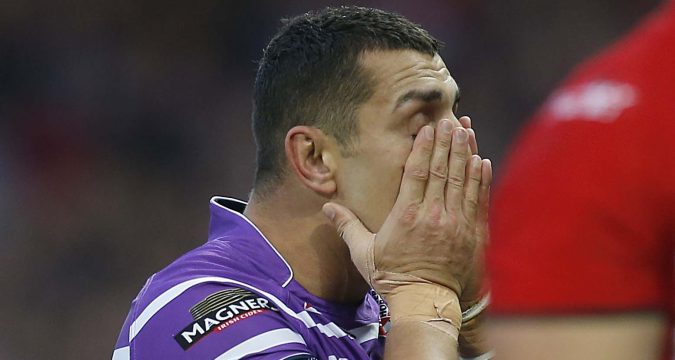 Michael Withers and the 1999 knock-on

Bradford and St Helens met in the 1999 Grand Final – with a controversial moment having a potentially huge say in the outcome of the match. Bradford shifted the ball wide, and when Leon Pryce raced away late on in the game, Bradford fans were delirious. However, referee Stuart Cummins had already pulled the play back for a knock-on against Michael Withers. Replays showed a fingertip touch from Withers – but what did you think?

The Champions in 2002 were St Helens. They defeated Bradford 19-18 in an incredibly enthralling Old Trafford showdown – but it wasn’t without late drama! Sean Long slotted a last-gasp drop-goal to nudge the Saints into the lead, before Chris Joynt was involved in a moment of drama right at the end of the game, taking what many believed to be a voluntary tackle to try and see the game out. There is now no mention of voluntary tackles in the RFL’s 2018 operational manual so if any players on Saturday do the Rugby League equivalent of bowling the ball along the floor, it won’t be quite as controversial as Joynt’s attempt.

Westwood’s punch on Green comes back to bite Blake Green picked up the Harry Sunderland Trophy for an incredible performance in Wigan’s victory over Warrington in 2013. But that was after he had suffered a nasty injury in the opening minutes of the match. The referee didn’t see the incident as it was in the tackle but it was Ben Westwood who inflicted the damage and was only put on report. Green played on with virtually one eye closed but lead his team to victory.

He’s back at Old Trafford on Saturday. Ben Flower will be eager to spend more than the few minutes he spent on the field in 2014’s Grand Final. Wigan’s forward was sent off in the opening three minutes of St Helens’ victory when he punched Lance Hohaia, once face to face and once with the stand off laid flat on the floor. Referee Phli Bentham, after consulting with Tim Roby and Saturday’s Grand Final referee, Robert Hicks, sent Flower to the sheds.

The man who had played a huge role in sending Castleford Tigers to their first ever Super League Grand Final in 2017 was sensationally suspended by his club in the week running up to the Grand Final with no explanation as to why. After the Final, it emerged that Hardaker had failed a drugs test a few weeks previous. Castleford went on to lose the Grand Final to Leeds Rhinos and sacked Hardaker. If you’ve been living under a rock and haven’t heard, Hardaker has since signed for Wigan, been caught drink driving and banned from driving. You can’t keep him out of the headlines!