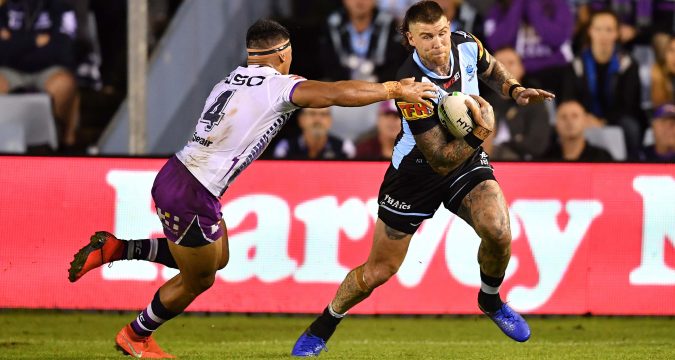 Josh Dugan has once again been offered to Super League clubs as a fresh batch of NRL players have emerged on the transfer market.

The Cronulla and Australia centre cropped up on Super League radars earlier this month, much to the surprise of many clubs.

But he has once again been touted to Super League clubs, who would inevitably be interested in signing the 29-year-old should they have the salary cap space to do so.

Dugan is on a hefty salary at the Sharks, raking in a figure that would make him one of the top earners in Super League.

Cronulla are keen to become salary cap compliant and may contribute towards his salary in Super League, should a club be prepared to sign him.

However, he isn’t the only player to be offered to clubs, who have been informed of the availability of several other well-known names.

The most high-profile of those is Josh Reynolds, the West Tigers halfback who, like Dugan, would command one of the biggest salaries in Super League.

Reynolds is reportedly on around £400,000 a year with Wests, who are trying to move players on for salary cap purposes.

Like Cronulla, Wests would likely help towards covering part of his salary should a Super League club make a move, though it remains to be seen if anyone will make a move.

Christian Welch, the Melbourne Storm forward who played for Queensland in this year’s State of Origin series, is another player who clubs have been alerted to recently.
Samoan international Mason Lino is among those on the market too, despite being under contract at Newcastle Knights.

The 25-year-old old played twelve times for the Knights this season, but the halfback could yet find himself in the Northern Hemisphere next season.

New Zealand Warriors duo Taane Milne, who made his debut for the club in the last game of the season after being sacked by Wests Tigers the year before for failing a drugs test, is another player available, as is powerhouse prop Sam Lisone, who played 11 times for the Warriors this year.