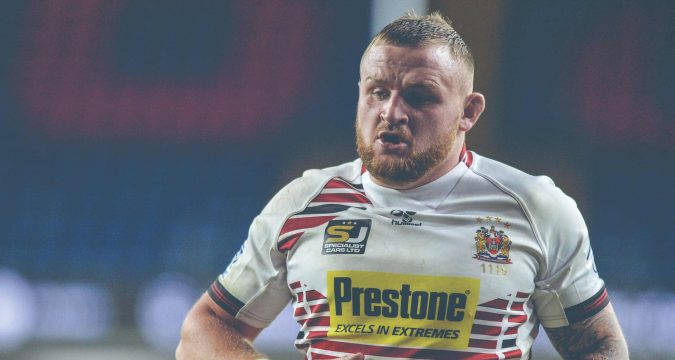 Brad Singleton insists he has not yet decided where his international allegiance will lie at this year’s World Cup.

The Wigan prop represented Ireland at the 2017 World Cup, but hasn’t made another appearance for the Wolfhounds since the tournament four years ago.

Singleton would once again be in contention to be selected if he decides to put his hand up this Autumn.

But the ex-Leeds and Toronto forward, 28, told League Express he is solely concentrating on club rugby for the moment.

“I’m just going to play my rugby at Wigan we’ll have to see where it goes around the time of the World Cup,” he said.

“Hopefully I’ll be in decent form at the back end of the season and I’ll have a think about that then.”

Singleton would also likely be in contention to be selected for the Combined Nations All Stars later this month, but his comments appear to suggest he will not be considering himself for selection.

Meanwhile, he has backed full-back Zak Hardaker to bounce back from the two-match ban he received following the 48-0 defeat by Catalans in Perpignan.

Hardaker, sent off following a headbutt on Sam Tomkins, would have got one game out of the way had Wigan’s Super League clash at Huddersfield on Friday not been postponed due to Covid issues in the Giants camp.

Next up for Adrian Lam’s side is Friday’s home meeting with Hull KR, their first match at the DW Stadium since spectators were allowed to return to grounds in limited numbers.

Singleton says Hardaker is determined to bounce back, explaining: “Zak’s in great spirits.

“It’s disappointing he got the two-match ban, but Rugby League doesn’t want head-butting involved in the game.

“Things boiled over, but he’s a professional, he’s played eleven years at the highest level and been quality.

“Everyone knows what Zak’s about – it’s a case of getting back on the horse for him. This won’t be anything more than a hiccup.”