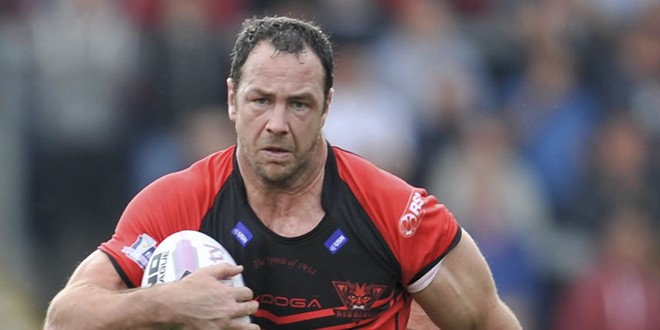 Salford Red Devils captain Adrian Morley will lead his team out at the highly-anticipated Magic Weekend on Saturday with every intention of claiming the two points against Widnes Vikings.

The Red Devils won the same fixture last year but their form in 2014 has been inconsistent. Morley, though, wants his ever-improving team to claim the spoils against the Vikings.

“We believe that we are improving,” said Morley. “We got the draw against Hull KR last weekend – it’s better than a loss but we were disappointed that we didn’t get the win. We believe that we have what it takes and we will go there on Saturday to claim the two points.”

Morley made the move from Warrington Wolves to Salford at the end of last season and says that the memory of his last Magic Weekend with his former club will stay with him forever.

“The highlight of all the Magic Weekends I have played in has to be last year when Warrington beat St Helens,” he said. “I scored a try in the last minute of the game and everyone made a fuss, the lads all jumped on me and the crowd were going crazy, it was a nice moment for me.”

The prop has played in a number of big finals over his career but he believes that a stage such as the Magic Weekend is a great opportunity for young players, and the sport, to show the world what it has to offer.

“It is fantastic for the younger players to get the chance to play in a world class venue such as the Etihad Stadium,” said Morley.

“Not many clubs get the chance to play in these big arenas either so it is a fantastic opportunity for the sport. It is a good chance for players to showcase their talents and also show what this sport has to offer.”