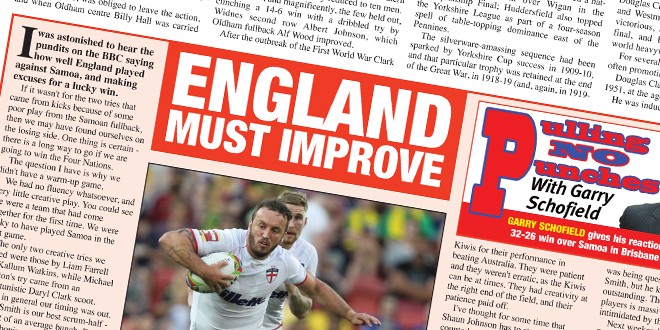 Garry Schofield got the Rugby League community talking last week when he insisted Steve McNamara MUST leave in an interview with TotalRL.com. It was picked up across the country, with the BBC brining Schofield up in their pre-match build-up. It resulted in criticism from Jamie Peacock, who disagrees with Schofield’s views. Former Golden Boot winner Schofield has reacted in his ‘Pulling No Punches’ column in League Express.

I am reliably informed that Jamie Peacock on the BBC said before Saturday’s Test that I’m out of touch with the modern game.

I didn’t see it, so my apologies if that wasn’t the case. Given that Super League has been totally incapable of producing the right type of sixes and sevens, then perhaps it is the case that I am out of touch with the modern way!

The best international team that Jamie played in was the 2009 England side that did so well to get to the Four Nations Final. You’ll remember that in the final against Australia Sam Burgess had a blinder. But we had two 20-year-old halfbacks in Kyle Eastmond and Sam Tomkins, who were only playing together for the second time in their lives. Neither even plays as a halfback any more. They did well, but were never going to be able to give us what we needed.

Yet afterwards, Jamie blamed the loss on there being too many games in Super League, with too few being of the right intensity. Talk about not being able to see the elephant in the room when the obvious point to raise was why were England relying on two kids in the most important positions on the field!

Nothing has changed since. In every international series in the Super League era, our lack of quality in the halves has stood out like a sore thumb, yet the pundits never raise it. In about three-quarters of Test series since 1996, we’ve chopped and changed the halfbacks midway through the tournament in the hope that two of them would click.

I could be flippant and suggest that, as a forward, Jamie doesn’t understand what the right type of halfback is.

On a serious note, until Kevin Sinfield in his later days, Jamie never played with a proper halfback of the right quality – one that controls a game and excels with his organisation and creativity.

The faster modern game in the 10-metre era played in summer has only served to produce individual types and not traditional halves. It wasn’t long ago that Great Britain had proper scrum-halves like Andy Gregory, Shaun Edwards, David Hulme and Deryck Fox to choose from. And also Mike Ford when he had the stomach for it. Even the uncapped Paul Bishop was much more of a natural half that Matty Smith, who can’t even play effectively at first man. That is how much standards of creativity have plummeted.

This isn’t a case of my era is better than yours. I want more than anything for this to be addressed.

In recent times – almost unbelievably – Lee Briers and Danny Brough haven’t been deemed good enough for Great Britain and England, largely because coaches like Brian Noble always got it wrong with the halfbacks. The problem is glaringly obvious, but all you will ever hear is that we lag behind the NRL because it is more intense and they play fewer games. Too many people don’t seem to want to acknowledge the real problem.

Our TV pundits will continue in the same vein and not ask questions about the genuinely important issues. Somebody, somewhere has to grasp the nettle and figure out where we are going so badly wrong with the production of creative footballers. Until they do, then I fear that the occasional Albert Baskerville Shield won on English soil is as good as it’s going to get for us.