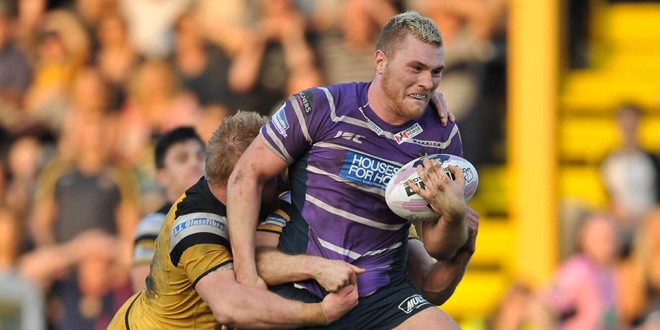 The 24-year-old prop, who is spending the 2015 season on loan from Wigan Warriors to Salford Red Devils, has signed a four-year contract with Hull from the start of next season.

The announcement ends a two-year pursuit by Hull coach Lee Radford and confirms one of the worst kept secrets in rugby league.

“Scott is a great acquisition and he showed why when he played against us earlier this season,” Radford said. “He was fantastic on both occasions.

“He is a Hull lad, a Hull FC fan and comes from a Black and White family, so he knows what the club means to the people of Hull and is really excited about playing his part in some success here.

“He has the ingredients to become a real leader in our pack. He plays big minutes and is one of the best English forwards in the competition at the moment, with his best years ahead of him.”

Taylor, who was a Grand Final and Challenge Cup winner in his first season with Wigan in 2013 was wanted by Radford for 2015 but that move was thwarted when the Warriors activated the third and final year of his contract at the DW Stadium and then sent him on loan to Salford.

“I’m really happy that the deal is finally done,” said Taylor, who is one of only three players to have started every match for the Red Devils so far this season.

“There’s been a lot of people guessing recently and I’ve had to keep it to myself, but it’s great that it is complete and I’m looking forward to coming home and pulling on the Black and White jersey.

“My mum’s side of the family are all die-hard FC fans and all have season passes this year.

“My granddad, Gordon, died last year and was a huge Hull fan. He was always really supportive of me throughout my career but it was his dream for me to play for the Airlie Birds.

“I had a few options put in front of me, but there was only really once choice when I knew Hull wanted to sign me and I can’t wait.

“Winning trophies at Wigan was an unreal feeling. It would be great to win trophies with my home team and I hope to bring my experiences of being in a double-winning squad to the side.

“But for now I am just concentrating on getting my head down at training with Salford and helping them for the rest of this season.”
Read more at //superleague.co.uk/article/32229/taylor-made-up-for-hull#T8MQOqwdsIKmkAAs.99