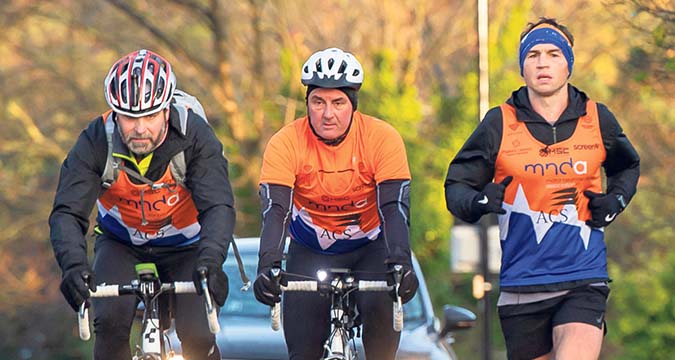 As League Express went to print on Sunday night, Kevin Sinfield’s seven marathons in seven days had raised nearly ten times the amount it set out to do.

Sinfield, who lifted the Super League trophy for Leeds seven times between 2004 and 2015, is running over 180 miles in a week, ending today (Monday), to raise money for former team-mate Rob Burrow and the Motor Neurone Disease Association, after the former halfback was diagnosed with the condition a year ago.

Having set out to raise £77,777, Sinfield flew past that target almost immediately and went past the half-million mark on Saturday morning.

Another ex-Rhino, Barrie McDermott, cycled alongside Sinfield for part of the journey.

“Mere mortals like me aren’t going to get their heads around Kev doing something like this,” said McDermott.

“I’m not a runner by any stretch of the imagination. I’ve done a few marathons, but I don’t like it. But these are the cards he’s dealt himself. He’s looked at his mate and thought we need to keep up the momentum in raising funds. I couldn’t not support him, and I’m blown away by what I’ve seen.

“I was cycling alongside Kev on Friday, which was the fourth day of the seven. By the end, I’ll have done three or four of the seven days. Phil Daly [the Rhinos media manager] has managed this superbly and the BBC have been all over it. With Sally Nugent, we’ve met a new disciple. She’s in awe of Rob and Kevin, even though we take them for granted.”

McDermott is behind another fundraising scheme for the charity. Burrow Seven is a three-year-old gelding and fans can buy a share in the racehorse for £59.

“A number of people are on an unofficial committee,” said McDermott.

“We sat around a table at Headingley, wondering what we could do, shortly after Rob was diagnosed. We have a very ambitious target in our mind – to raise money for Rob’s family to bring him peace of mind.

“We didn’t just have a high target in mind, we’ve also had to deal with Covid. But these things are never about one person. Doddie Weir [the former Scotland rugby union international who also has motor neurone disease] has done amazingly well and he’s always said that anyone can get MND, and many might not have the support of someone like Rob.

“Phil Hawthorn from Wigan initially came up with the idea of getting the horse. He has two great passions in life – Wigan Rugby League, which I can forgive him for – and horse racing. He pitched the idea. I talked it over with a few people and wasn’t sure how it would go down with our small Rugby League family. While MND doesn’t get many headlines, it affects a lot of people. There can be 5,000 affected by it at any one time in the UK.

“I’d like to think that while Kev’s strength is running marathons, mine is organising things and getting people to say yes to things they might not otherwise want to. Former racehorse trainer Henrietta Knight recommended we buy him. He had to be under the age of four, then we could name him. Jedd O’Keeffe is looking after him and it’s a full-blown project.

“To be part of something so exciting, so inclusive, so Covid-friendly is great. There’ll be plenty of races for us to get to or to watch on TV. It’s a 12-month membership that people can buy for £59. The money is going to Rob’s fightback fund, which is allocated for research and development with Rob’s name on it. And also to the MND Association, which, like all charities, is desperate for money.”

Asked how he was coping with the ongoing situation faced by Burrow, McDermott said: “It’s peculiar to me to be weeping and crying on a semi-regular basis. Kev and me have tears in our eyes regularly and we bring each other around with a bit of humour. But the enormity of what our mate is fighting can’t be underestimated.

“I’m okay, I have a lovely family and a number of things to keep me occupied. I can’t do anything about Rob’s condition, but I can plough my time and energy into things like this. We’ve got a few thing planned for 2021, including coming to a racecourse near you, having some champagne and seeing Burrow Seven win.”

To buy a share in the horse, visit www.burrowseven.com.