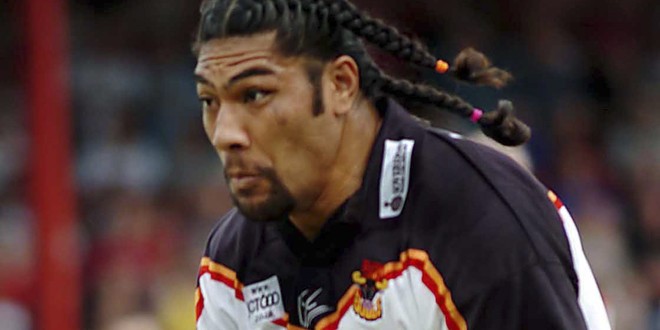 After Ryan Hall’s incredible performance in the Tetley’s Challenge Cup final against Castleford Tigers on Saturday, we’ve taken inspiration from the man dubbed ‘World’s Best Winger’ for this week’s Six of the Best.

Hall is well known for his incredible feats of strength close to the line – as we saw with his superb brace of tries at the weekend. So we’ve been asking you to give us six more incredibly strong, robust wingers that are just too hard to handle for opposition wingers. Whether it’s past or present, or Super League or NRL, there are plenty to choose from – and here are the six you picked more than any other!

Manu Vatuvei
A one-club man for the New Zealand Warriors since 2004, Vatuvei still remains one of the biggest, strongest wingers in world rugby. Vatuvei was top scorer for the Warriors last season, and was the first man to score 100 tries for the club. He’s scored some ridiculous tries during his career, including some incredibly freakish scores that many wingers wouldn’t dream of attempting. Still a New Zealand international to this day, will Vatuvei ever sign up to play in Super League?

Far from the biggest winger ever to step foot on a Rugby League pitch, Jason Robinson was still one of the most powerful wingers the early years of Super League ever saw. He was also blessed with blistering pace and an incredible ability to beat defenders – all of which made him one of the most popular wingers in Wigan’s history. Even in rugby union Robinson continued his incredible reputation, winning the World Cup with England in 2003.

Lesley Vainikolo
By far the most popular nomination for this week’s Six of the Best was former Bradford Bulls legend Lesley Vainikolo. As Super League defences all across the country quickly found out, Vainikolo was a real once in a lifetime winger, and had a fearsome reputation for being one of the most destructive wingers in Bradford’s all-conquering side of the early-2000’s. A quick YouTube search would produce some memorable moments – including one that Martin Aspinwall would probably want to forget!

Hall himself couldn’t be left out of a list of this type – with his performance on Saturday one of the greatest from a winger in Wembley history. The England international simply loves scoring at Wembley, and Rob Burrow described him after the game as a “prop playing on the wing”! That may not be strictly true, but with a physique most forwards would be proud of, there’s little doubting Hall’s stature as one of the finest wingers in world rugby at this moment in time.

Pat Richards
Richards left a huge hole on the wing when he departed Wigan last year to head back to the NRL with Wests Tigers – but most Super League defences will have been glad to see the back of him. Standing at over six feet tall, Richards was a real presence throughout his years in England, and gained a real reputation for being incredibly tough to handle. A goal-kicking phenomenon too, Richards is one of the greatest wingers to grace the English game in recent years.

Fereti (Freddie) Tuilagi
Tuilagi didn’t get as many nominations as plenty of other wingers on this list – but he was such a cult favourite amongst Halifax and St Helens fans, we couldn’t leave him out! He signed for Fax after the 1995 World Cup, scoring 29 tries in two seasons with the West Yorkshire club. A move to St Helens came around, and he played a number of positions for the Saints – including in the back-row, which is no mean feat for a man who made his name on the wing! Tuilagi was a real monster in the early years of Super League, and has to be regarded as one of the strongest wingers to grace the modern game.