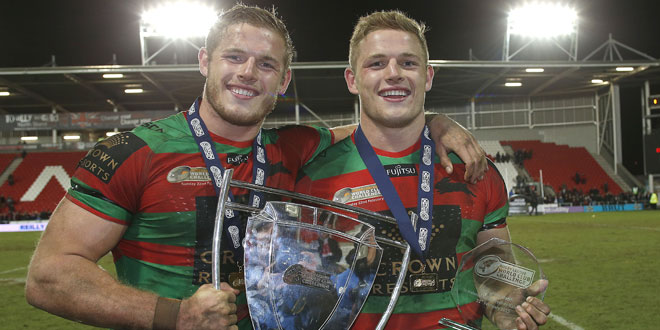 St Helens went down to a shattering World Club Challenge 39-0 defeat tonight at Langtree Park in the face of a stunning performance from South Sydney Rabbitohs.

The Rabbitohs set a new record for the World Club Challenge, scoring seven tries, five goals and a field goal to run up 39 points, eclipsing the 38-0 scoreline in 2003, when Sydney Roosters defeated St Helens at Bolton.

And Souths established their dominance from the start of the game, with Glenn Stewart scoring their first try in the second minute from a clever kick by Adam Reynolds, who was a strong contender for man of the match honours.

Reynolds converted and increased the Rabbitohs’ lead to eight points with an eighth-minute penalty, before the video referee rules out a try by Mark Percival, who couldn’t quite get the ball down.

After that the Rabbitohs ran in a succession of tries from Dylan Walker, captain Greg Inglis and Joel Reddy before half-time, and at that point the trophy was already in the bag.

And, in front of the Rabbitohs’ iconic owner Russell Crowe, the agony for St Helens continued after the break, with further tries to Luke Keary, Chris McQueen and Reddy again.

And it was Reynolds who added insult to injury in the 78th minute that consigned St Helens to the history books for all the wrong reasons.

After their 52-6 victory over Salford Red Devils a week earlier, it was a sobering experience for St Helens coach Keiron Cunningham, who admitted he was shellshocked by the result. “I knew they were a good side, I watch them on regular occasions,” said Cunningham.

“I knew what they were going to do. They complete the ball in the upper 80s, whilst we were down towards 50 per cent. You can’t beat anybody with that type of ball possession.”

A full report and analysis will feature in the new edition of Rugby League Express.