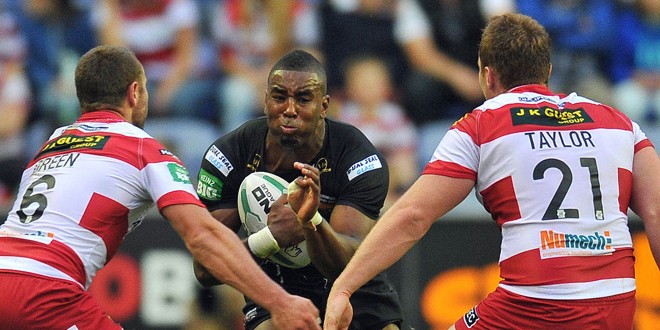 It’s finally here. After what seems like an eternity of waiting, Super League 2014 gets underway this evening when reigning champions Wigan Warriors host Huddersfield Giants at the DW Stadium.

This standalone fixture was engineered by Wigan coach Shaun Wane who, with one eye on the World Club Challenge on February 22, requested Huddersfield as his first opponents. Wane believes the physicality and speed of Paul Anderson’s men best replicates what Sydney Roosters have to offer and saw it as ideal preparation. However, his side is still firmly focused on the matter at hand – kicking the season off with a win.

“I am looking forward to it immensely,” said Wane, who is without England winner Josh Charnley for tonight’s clash.

“To have Huddersfield visiting the DW Stadium as the winners of the League Leaders last season before we head off to Sydney is a great thing for us and for me personally.

“We want to build some momentum and we will do that by doing what we do well. When we attack with a bit of fluidity then we seem to score tries so that is what we need to do. It’s about doing it under a pressure situation.”

Giants coach Paul Anderson is also feeling confident. He said: “This is our chance to not only showcase Super League, but to showcase the Giants ourselves,” he said.

“We believe it’s an honour to be playing in the opening game of a new season, and we’re looking forward to showing a wide audience what we’re all about.

“But we don’t feel under any sort of pressure to perform. Wigan are the ones who are under pressure. They’re at home and are the team that’s expected to win, and we’re comfortable with that.

“It’s our intention to go out there, enjoy ourselves and make the rest of the competition sit up and take note in the process. Even though we finished top last season, it still feels as if we’re going under the radar as a club. There seems to be a lot of talk about what others sides are going to do, and very little about us.

“But I have complete confidence in this group of players, and I know that if they play to their full potential we can beat Wigan tonight and prove we’ll be even stronger this time around.”

Where can you watch it?

In the flesh
At Wigan’s DW Stadium. Ticket costs and the stadium postcode can be found below.
On television
Sky Sports will show every second of the encounter. Build-up starts at 7pm on Sky Sports 1/HD1.

All odds courtesy of OddsChecker and correct at time of publishing

Handicaps
Unibet, 32Red, Betfair and Betdaq are all offering +/- 7.5 points

Wigan 20-18 Huddersfield
A last-minute Matty Bowen try seals it for the reigning champions.

Watch the below video to see what happened when the two sides met in the opening round of Super League 2010.