Some time ago the Rugby Union Premiership was effectively sold to CV Partners, a private equity company, for £220 million.

And now Super League, under the guidance of its Executive Chairman Robert Elstone, is on the verge of doing the same thing, although for a much smaller sum of money.

I understand that the likely offer from such a company buying into Super League would be £50 million, or perhaps even a little less than that.

So what would the private equity company get for its money?

It would acquire a controlling interest in Super League, in other words 51 per cent of the equity.

For that it would have total control of the competition, as well as a right to 30 per cent of all future income from broadcasting an other sources that the competition generates.

The Super League clubs, which last week effectively killed off the Toronto Wolfpack, would lose the right to make decisions, which from the point at which the deal is struck would all be in the hands of a company that would be coming into Rugby League with no background in our sport.

The clubs would certainly receive an initial sum of money to calm the nerves of their bank managers, and it’s hard to believe they would spend it on anything other than paying off their existing overdrafts and loans.

Unfortunately the clubs are like drowning men who will grasp at any straw that might keep them alive. That puts them in an incredibly weak bargaining position. It’s a fire sale by a desperate group of clubs. A private equity company will gobble them up without any mercy.

And I wonder whether the clubs really understand the risk they are taking by going down this road.

If the private equity company decides, for example, that some clubs are not pulling their weight it may well have the power to boot them out of Super League and to replace them with other clubs.

Any club with a dilapidated stadium, for instance, might ultimately be on very stony ground.

I understand that the merchant bank J Rothschild has secured the company that will soon be introduced to the clubs, and that Super League has already incurred a fee of around £750,000 for this purpose, which will remain payable even if the clubs don’t want to take up the offer.

Of course we all like to be offered lots of money.

But sometimes the price is just too high.

Can Rugby League be an aspirational sport?

The worst thing for me about last week’s decision by the Super League clubs to chuck Toronto Wolfpack out of their competition was the message it sends out about the lack of ambition in our sport.

Here we had a club that had arisen out of absolutely nothing, but which had attracted a young, vibrant group of supporters who clearly loved what they were watching, but were not hamstrung by any previous allegiance or negative impressions that they might have picked up if the club had been based in the British Isles.

Those new supporters were clearly aspirational and we have now sent them packing, to bunker down in our game’s so-called heartland.

Having read the Super League report into the possible strategic advantages for Super League of having a foothold in Canada, I was astonished by what I was reading.

How can anyone say that there is no potential for growth in Canada’s largest city?

And how can anyone say the sports market is saturated there?

Surely on that basis the market along the M62 is saturated.

The strange this is that Robert Elstone was claiming earlier in his tenure that he wants to target a younger audience for Super League. And he’s right to do so.

But young people these days have wider ambitions than merely wanting to play for their local town team. They want something that is, frankly, more glamorous, like flying across the Atlantic to play or watch Rugby League in Toronto.

The prospective owner of the Wolfpack, Carlo LiVolsi, offered Super League a significant financial stake in his Wolf Grooming products. But I don’t think the clubs fully understood the nature of that proposed deal. And perhaps LiVolsi may be accused of not making clear how much revenue that deal would have generated for Super League.

Toronto gave Rugby League an opportunity to re-position itself as an exciting, forward-looking sport that could provide great experiences.

But now that opportunity has been blown.

I still find it difficult to believe.

The dilemma of non-selection

“I’ve always said I would pick players on form, and I think it’s important to show that,” said Wane.

“We’ve seen some fantastic rugby since the season restarted in August, and I thought last Friday’s game between St Helens and Wigan was the best yet.

“Toby King and Ash Handley have been two of the lads who have really impressed me with their performances and consistency, so it’s right that they are recognised for that, and they know they are in the group I’ll be contacting regularly until we can get together properly.

“Some other players have fallen below the standard of performance I need from my England players, so again it’s right that they have been told that as things stand I don’t regard them as part of the group.

“But they know the door isn’t closed – it’s up to them how they respond.”

I will indeed watch with great interest to see how many of them can force their way back into the squad.

Last Thursday was bonfire night, and it’s a day that’s always special to me because it was my late mother’s birthday.

She was born in 1919 and exactly one year later Swinton gave a debut to one of their greatest players.

Hector Halsall, the legendary captain of Swinton’s most famous all-conquering team that won All Four Cups in 1928 made his Lions’ debut, following a relatively low-profile arrival from Wigan.

Halsall’s name is one of the most famous in Swinton’s history, as the captain of the immortal Swinton team that carried off the Championship, Challenge Cup, Lancashire League and Lancashire Cup.

He is the last captain to have stood in front of All Four Cups. 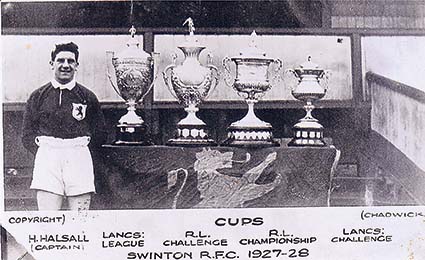