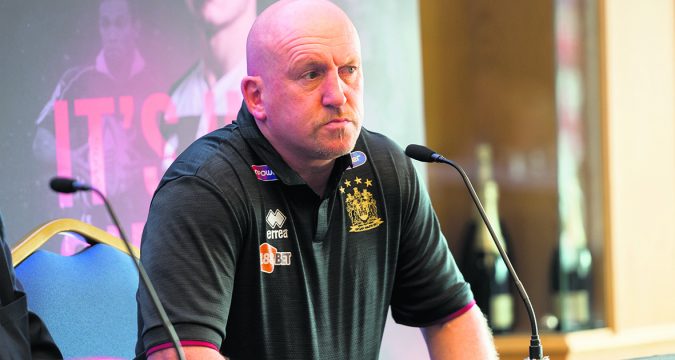 Part four of our countdown…

In April Shaun Edwards finally confirmed that he would not be returning to coach Wigan in 2020.
In August 2018 Wigan had announced with a significant fanfare that they would appoint Adrian Lam on a one-year contract for 2019, with Wigan icon Edwards taking over from 2020.
But speculation had mounted that Edwards was having second thoughts about the deal and finally he and the club issued a joint-statement with Edwards in which he admitted he felt that the club needed a “more experienced Rugby League head coach”.
The announcement came hours after the Sunday Times reported that Edwards was due to extend his stay as the defence coach for the Wales rugby union team.
Edwards insisted money was not the major issue.

19 Bulls to move to Dewsbury

In August Bradford Bulls revealed that they would leave their Odsal home of 85 years to play at Dewsbury Rams’ Tetley’s Stadium for the next two seasons, subject to RFL approval
The move from their historic stadium was described as the end of an era for the Bulls, with the then Chairman Andrew Chalmers blaming the cost of rates, rent and maintenance for the decision in a statement on the club’s website.
“Our new home, Tetley Stadium, Dewsbury, is approximately 10 miles from the M606, and is a boutique and intimate Rugby League stadium, with an existing capacity of 5,100, and expandable to 8,000 if required,” said Chalmers.
“Having played there and undertaken significant due diligence, this stadium represents an affordable economic choice for the Bradford Bulls, whilst we work through the task of developing an equally affordable boutique stadium development in Bradford.”
The RFL subsequently gave permission for only a one-year move to Dewsbury and within weeks the club was sold to former RFL CEO Nigel Wood, who promised that one of his main priorities was to get the club back to Bradford.

In mid-June Gold Coast Titans announced that they had signed Leeds Rhinos captain Kallum Watkins until the end of 2021 and he was due to join them almost immediately, ending his association with the club for which he made his Super League debut in 2008.
With 25 Tests for England, 266 games for Leeds and three Super League titles, the loss of Watkins, who had struggled with injury and form over the previous 12 months, was nonetheless a major blow for the Rhinos.
Reports had suggested that the Rhinos had tried to downgrade his contract and that was the final straw that persuaded him to sign a deal with an NRL club, where next season he will be coached by former St Helens coach Justin Holbrook.
“Kallum is an exceptional talent,” said Gold Coast Director of Rugby Mal Meninga.
“I have had to coach against him with the Kangaroos, and he is a very dangerous player.

Two days after the Super League Grand Final Wayne Bennett named his 24-man Great Britain for the tour of the Southern Hemisphere.
And in that squad he selected three players – Lachlan Coote, Jackson Hastings and Blake Austin – who qualified to play for Great Britain through the grandparent rule.
He also selected another seven English players who were currently playing in the NRL.
It was a controversial selection, with Bennett seeming to turn his back on a host of Super League players, which was accentuated on the tour itself, with Super League players generally at the back of the queue when it came to being selected for the Great Britain team.
And, in a further sign of the squad’s imbalance, the squad was packed with halfbacks, but was lacking threequarters, a fact that would come back to bite Bennett as the tour progressed.
Warrington Wolves were the most represented club on the tour, with five players included.

On the first day of the year Super League announced that it would introduce golden point and shot clocks into its 2019 competition.
The latter was designed to speed up the game, while the former was designed to encourage a result in a game that had been level after 80 minutes.
As it turned out, we only had to wait until Round 4 of the competition, when Wigan hosted Hull FC at the DW Stadium on 24 February to see the golden point rule in operation for the first time.
And it turned out to be a thriller, as Hull FC’s Marc Sneyd kicked the winning field-goal on 82 minutes to give the Airlie Birds a 23-22 victory after Zak Hardaker had missed a conversion attempt in the final minute of normal time that would have given victory to Wigan after a late try by Oliver Gildart.
And it was a vital game for Hull, who came into the game on a run of 13 successive defeats and finally got their season underway.
And the game was notable for the performance of Gareth Ellis, in his first game since coming out of retirement at the end of the 2017 season. 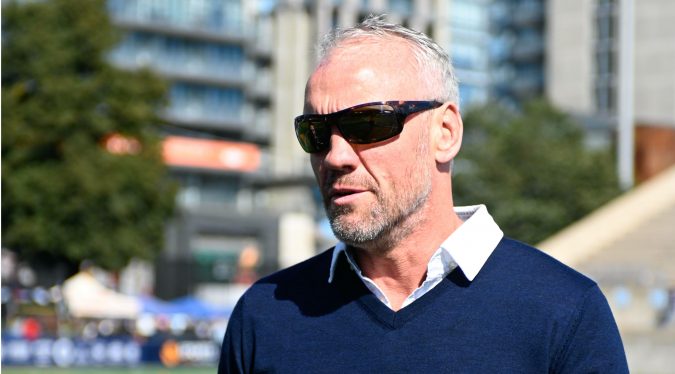 In late November Toronto Wolfpack revealed that Brian McDermott (pictured) had been handed a new five-year contract, committing his future in Canada until 2024 as Toronto prepare to make their Super League debut.
“The Wolfpack is here for the long term,” said McDermott, a year after first joining the Wolfpack.
“From the moment I walked through the doors here I knew we had great people.”
McDermott’s decision to commit himself to such a long contract under director of rugby Brian Noble came on the back of the club signing dual-code rugby star Sonny Bill Williams.
“We have the bravery to aim high,” added McDermott.
“We have players and staff that have the courage to say we want to be in finals and achieve success.
“The biggest attraction the club has to me is its unique status. It’s the first transatlantic sports team and anyone would want to be involved in anything that’s a ‘first’.
“While five years is a long contract and a massive commitment, it makes sense as the club needs long-term coaching that will see systems and processes being put in place on and off the field in the pursuit of continued success.”

In July Wigan confirmed that they had signed Jackson Hastings on a two-year contract from 2020, but with a get-out clause giving him the option of leaving for the NRL after one year.
Warriors’ executive director Kris Radlinski said Hastings has already underlined his commitment to Wigan by turning down more attractive offers elsewhere.
“This is a hugely significant signing for Wigan Warriors,” he said.
“In Jackson Hastings, we have secured the services of one of the most sought-after talents in the game, having fought off interest from around Super League and in the NRL.
“Jackson has a burning desire to win things in England and that ultimately lead to him joining us and turning down bigger money elsewhere. I believe his leadership and influence will play a big role for us in 2020 and beyond.”
Hastings would later go on tour with Great Britain, where rumoured fallouts with some of his future Wigan colleagues fuelled suggestions that he may want to pull out of his Wigan contract, although the club insisted there was no truth in those rumours.

13 Newcastle to kick off the World Cup

In January the organisers of the Rugby League World Cup announced that the opening game of the 2021 tournament would take place at Newcastle’s St James’ Park on Saturday 23 October 2021, when England will play host to an opponent yet to be revealed.
Organisers unveiled up to 14 venues for the 31 matches in the men’s tournament and other venues for the women’s and wheelchair events which will be run alongside the main tournament for the first time, resulting in a total of 32 teams competing across 64 games in two months from October 27, 2021.
St James’ Park was up against, Elland Road, Anfield and the Manchester’s Etihad Stadium to host the opening ceremony and the first game.
The organisers also revealed that Arsenal’s Emirates Stadium will host one of the two semi-finals, although just two of the 31 matches in the entire tournament will take place south of Sheffield.
Later in the year the organisers decided to take three more games to Newcastle Thunder’s Kingston Park stadium, after Allerdale Council failed to follow through on a commitment to build a new stadium in Workington.

2019 was a breakthrough year for Salford Red Devils.
And the most significant moment for the Red Devils was not the Grand Final itself, but the Super League play-off semi-final when they defeated Wigan 28-4 at the DW Stadium after having lost 18-12 to the Warriors at the same venue in the opening week of the play-offs two weeks earlier.
What was striking was the support the Red Devils took to the DW Stadium. They had around 4,000 fans in the stand behind the goalposts, which was almost half of the disappointing official crowd figure of 9,858.
Salford’s victory, which took them to the Grand Final for the first time, wasn’t just down to the tries they scored or their outstanding defence. It was the way they put right the errors they had made a fortnight earlier and thereby didn’t give Wigan any opportunities to hit back at them.
The key statistic for Salford was that they only made two handling errors in the match, compared to Wigan’s 12. In the game two weeks’ earlier they had made 12 themselves. It was a remarkable performance and although they couldn’t get the job done against St Helens eight days later, it threw down the gauntlet to the other clubs in Super League.

On the first day of October Leeds Rhinos confirmed that they had signed Castleford and England halfback Luke Gale on a three-year deal for an undisclosed fee.
It meant that, at the age of 31, Gale would return to the club where he started his career, after missing the whole of Tigers’ 2019 season with a ruptured Achilles tendon, while he had appeared in only 15 of the Tigers’ 31 Super League games in 2018 after suffering a knee injury.
Gale won the Albert Goldthorpe Medal three years in a row from 2015 to 2017, adding the Steve Prescott Man of Steel award in the last of those years, when he played a key role in getting the Tigers to the Grand Final and then played for England in the World Cup Final.
“I am looking forward to the challenge,” said Gale, of his impending move.
“Throughout my career, I have never been afraid to test myself and that challenge has always brought the best out of me.”

The final part of our countdown from 11 to number one will be online from 6pm tomorrow.