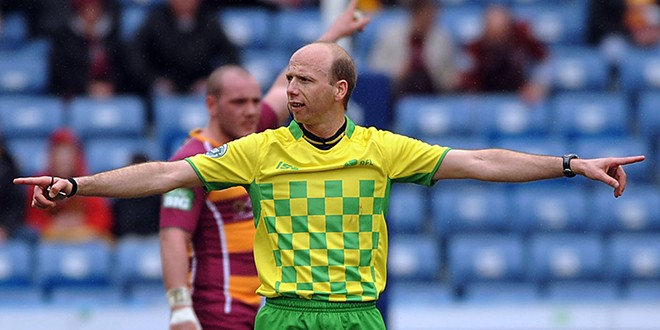 French official Thierry Alibert has stepped down from his role as a Super League referee.

The 42-year-old, who has refereed in three World Cups, has been appointed as Head of Match Officials with the French Rugby League Federation.

“After the World Cup in 2008, the day when my mobile phone rang and Stuart Cummings asked me to come and referee in Super League was a great day in my career,” he said.

“I will never forget the opportunities I have had, or the great people I have met.

“In the last few months it has been a little hard for me, so when the opportunity with the FFR13 came I didn’t hesitate.

“It will be good to be back close to my family, friends, sunshine and the beach. My aim will be to find a new referee to replace me in Super League.”
RFL Director of Standards and Licensing Blake Solly said: “Thierry has decided to take up an exciting opportunity in France and on behalf of the RFL I would like to wish him well in the post.

“Thierry has been a valued member of our full-time team since joining in 2009. His commitment to refereeing was absolute, and I would like to thank him for his contribution to the RFL and Super League in his time with us.”