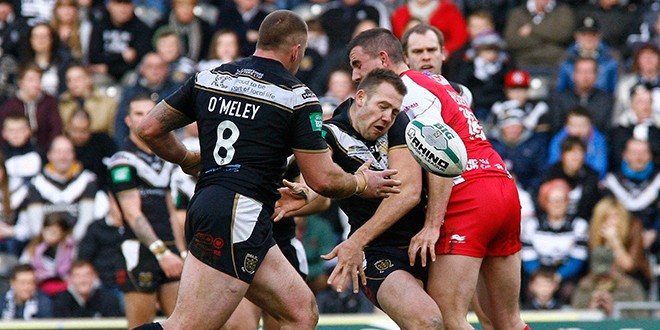 A debate is currently raging on our forum after one of our established members – and a die-hard Hull KR fan – suggested the two East Yorkshire sides should merge into one, at the sacrifice of tradition, but with financial benefit.

Here are a few snippets from his lengthy argument. You can read the full post here and see what everyone else is saying. You can also join in the argument on Twitter.

“The problem with any merger discussion is that opposition to such plans rarely gets past a base emotional level as screams of “Never!” and “Tradition!” drown out the much calmer, more level-headed NRL-type restructure arguments. Whilst I understand that this is an emotive issue and have in the past been sympathetic to merger opposition (being at times torn myself), more recently I have come to view most defenders of our traditional teams and sporting models as little more than spoilt children sulking at being asked to share their favourite toys.”

“So much negativity is spoken about mergers that I want to focus on some positives. For me, the idea of attending the KC Stadium for the inaugural game of the new merged team (presumably against Leeds or Bradford) simply gives me goose bumps. Picture the scene: 20,000 packed in, the big screen showing some old footage with a clever segue into the new team’s logo (the colours presumably black and red) and some booming atmospherics across the PA as the new side – an amalgamation of local and world talent – run on, previously divided families and friends now joined together and cheering as one in embryonic fervour. This would be an unforgettable moment spoken of in local pubs and clubs for decades to come.”

“Quite simply, we limit ourselves as a sport by too much deference to history and tradition by spreading ourselves too thin in our heartland regions.”

“What we would lose in Hull by way of tradition (and what we have previously done can never be tarnished, never be deleted) we would gain in a wider appreciation of our town and in the sport that we nurtured and then helped to kick on. And that is worth a million pointless Hull derbies of mediocre standard played out against a backdrop of indifference and financial ruin. “Are you red-and-white or black-and-white?” I am neither. I’m simply a rugby league fan from Kingston-upon-Hull frustrated by our outdated sporting mechanisms and I want my modern team.”