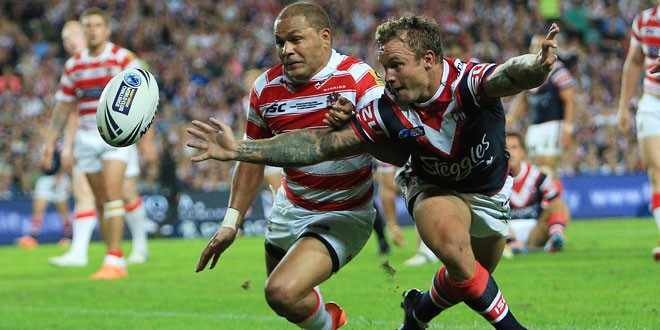 Unlike the retailer John Lewis, we know that many of Rugby League’s wares are often undersold.

Such was the case with Saturday’s World Club Challenge in Sydney, which drew a crowd of over 30,000 despite a low key build up. Indeed it was difficult to find out at this time last week at exactly what time the game kicked off. That indicated an almost disrespectful approach to the match by the NRL.
It was the first occasion the WCC had been staged in Australia since 1994, so you might expect the Aussie public to turn up in numbers, which they did indeed. No wonder then that both coaches of the competing teams, Trent Robinson and Shaun Wane called for the World Club Challenge to be marketed to its full potential in future years.
The big question is how best to make it into the event it deserves to be.
Should it be expanded to include more teams, or will that simply dilute the concept, not to mention trying to fit all those extra games into a fixture list that is already bulging at the seams? Some of our top administrators think it can be accommodated and the benefits will be worth it, although their grand scheme could be scuppered by the new appetite for Nines created by the recent Auckland tournament.
The general consensus is that Wigan didn’t do themselves justice in Saturday’s match at the Sydney Football Stadium, although they certainly didn’t disgrace themselves. Australian TV commentators described the game as being between the best side in Super League and in the NRL.
They well might be and we’ll know for definite in October. But one fact that is obvious is that the two teams were not the same as the ones that won their respective Championships last year. No Sam Tomkins or Pat Richards for example, with Wigan fielding five players who didn’t play at Old Trafford.
If our administrators could make it possible to play an expanded World Club Challenge in the early part of the year, surely a match-up between the two champion sides could be made to happen in the week following the two Grand Finals. Now that would be a true World Club Championship.