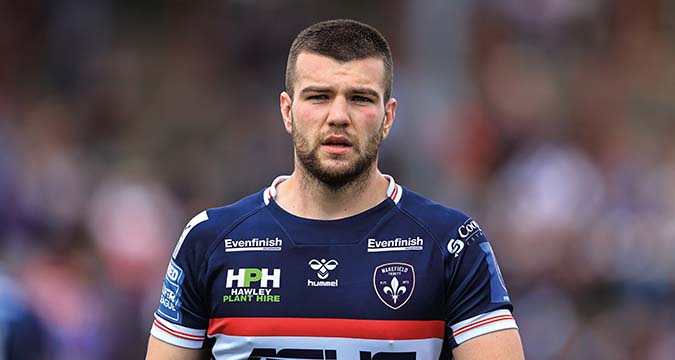 By JOHN DAVIDSON and DOUG THOMSON

Following the capture of Lee Gaskell from Huddersfield for next year, League Express understands the 24-year-old, who is out of contract this year, has agreed to stay with Trinity.

It is believed Wakefield-born Jowitt, who made his debut in 2014, will pen a further two-year term.

The son of former Trinity player Ian Jowitt, Max has made more than 80 appearances for the West Yorkshire club.

This season he has been in impressive form, making nine appearances, scoring one try and notching six assists.

Wakefield have two other fullbacks, Alex Walker and Ryan Hampshire, who are both out of contract at the end of this season.

It is believed neither have yet sorted out their future, and it appears unlikely both will remain at the Mobile Rocket Stadium in 2022.

Gaskell is joining from Huddersfield on a two-year deal to run from next season.

The 30-year-old has a wealth of experience, having also played for St Helens, Salford, Bradford and Huddersfield.

Gaskell, comfortable at fullback, halfback and in the centres, said: “I’m really looking forward to joining Wakefield next year and the challenge it’s going to bring.

“I think they’ve got a really exciting squad there and I’m looking forward to playing with them.

“They play a way which excites me, and I see myself as an attacking threat, whether that be halfback, fullback or any other position.

“I like to throw the ball about and the way they play, I think, will suit my style.

“There’s some real good competition for places at Wakefield and any good team needs that.

“Max Jowitt at fullback is a terrific player and the halves in Jacob Miller and Mason Lino are quality too.”

Meanwhile Wakefield coach Chris Chester is rueing yet another knee-injury blow for star winger Tom Johnstone, but he is relieved he has Liam Kay in the ranks.

Unlucky Johnstone, having previously sustained anterior cruciate ligament damage in both legs, was in the second game of his comeback from concussion when he suffered a lateral meniscus tear during the 14-6 home Super League win over Wigan last time out.

The 25-year-old England international is expected to be out for two months.

It was his 100th game for Trinity, but it has taken him six years to reach the landmark, and coach Chester said: “To miss another large part of a season is gut wrenching for Tom and really disappointing for the team. He is such an important player to us.

“But it gives an opportunity to Liam Kay, who I thought was unlucky to miss out when Tom came back in.

“His finishing capabilities have been second to none and he has done really, really well this year.”

Wakefield’s scheduled game at Salford on Thursday was postponed because of Covid issues in the Red Devils camp.