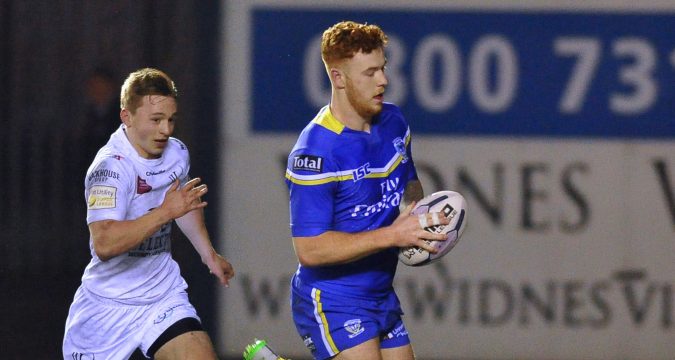 Part of this article first appeared in the January 2nd edition of League Express. Get this news first every week by purchasing the paper every Monday in stores, or online on a Sunday at totalrl.com/le

Warrington Wolves youngster Harvey Livett has insisted he is ready to make an impact at first-team level after a man-of-the-match performance in the club’s opening pre-season game last week. And his coach admits he wouldn’t be surprised if he picked the talented youngster again.

Livett, who is the son of former Workington player Peter, was the pick of the players in Warrington’s recent 28-18 win against Widnes in their opening pre-season game for the 2017 season.

And the versatile Livett, who excelled in two different positions last week, neither of which were his preferred role, has been nominated by League Express as one of Super League’s rookies to watch in 2017, and says he feels that after graduating from the club’s Academy, he’s ready to make his mark in Super League.

“My goal is to play for the first team in a Super League game this year,” he said.

“Tony (Smith) has spoken to me regularly and he’s told me to keep my head down and keep working hard and the chance could come.

“I’m out of Academy full-time and I feel like I’m almost ready now. Hopefully he’ll pick me for that first game.”

And Livett’s confidence was backed up by comments from Smith after the win at Widnes.

“If I threw Harvey into the team in the next few weeks then I’d be confident in him,” Smith said.

“If I picked him in a few weeks, there’d be no surprises there. We’re hoping he’ll get some senior action soon; both he and I are hoping that’s the case and I’m sure his parents are too!”

As a born-and-bred Warrington youngster, the former Rylands junior is now hoping to follow in the footsteps of other Warrington-produced players who have developed into regular Super League stars.

“Seeing lads like Ben Currie and Rhys Evans come through and go from Academy to the first team shows there is a pathway at this club,” he said.

“You aspire to be like them and to get another step closer. A strong performance like this will hopefully get me nearer to realising my dream.

“I’m a Warrington lad and this is a dream come true. I thought I did well to say I played in two different positions, and maybe that will stand me in good stead. I’ve just got to get my nose in and get in the side wherever I can and hopefully the versatility can do me a favour or two.”

To find out which other players have been nominated as rookies to watch in 2017, purchase the new League Express now, available in stores or online at totalrl.com/le