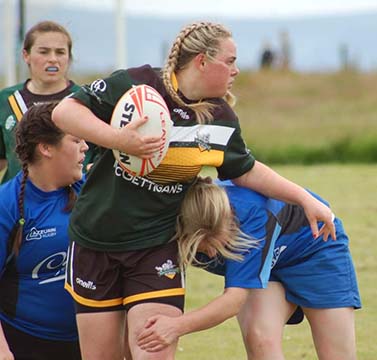 Stephanie Carroll made history at the weekend by becoming the first try scorer in the inaugural All Ireland Women’s domestic rugby league fixture. The Dublin City Exiles centre was in outstanding form, along with stand off Syphonia Pua, as the Exiles claimed an impressive win at Galway Tribeswomen.

Newly-appointed Ireland women’s head coach John Whalley believes the start of the league, involving five teams, will have a major impact in Ireland. “There’s been a lot of interest,” he said. “The timing is perfect, we are running two open day sessions for the national side – one in Ireland and the other in England – with more dates pencilled in if needed.

“The European Women’s Championship scheduled for 2022 is fantastic news for the international game, it is something that we at Rugby League Ireland are really looking forward to being part of. It will be great to test ourselves, we aim to get two or three national team fixtures in before we get to the Euros to start to build partnerships and understandings.”

Whalley, who is assistant coach of Wigan Warriors Women, added: “I’m really excited for the girls and seeing the talent we have available in Ireland. We want to promote our game to the widest possible audience by playing attractive, fast flowing rugby league.”

The Tribeswomen face Athboy in the next scheduled fixture.