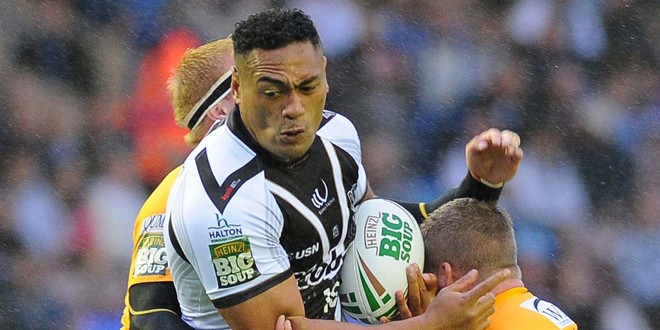 For a variety of reasons, there are some pretty ordinary sides in Super League this season. But which have been the worst since the inception of the competition? Dave Hadifield, in reverse order, picks his way down Bad Memory Lane for Rugby League World Magazine…

Widnes Vikings, 2012 – 12 points
Elbowing other contenders aside and squeezing into the Hall of Shame are the Vikings of two years ago. They are such a competitive side now that it’s hard to remember how tough it was for them in their first season back in the top flight.
Denis Betts always said it would take time and it did. They managed just six wins and conceded a thumping 1082 points. They had their moments, though, including a 37-36 victory over Wigan.
Significantly, most of the squad which has matured into a prospective top half side was in place. They stand as a monument to the character-building properties of a burst of being the worst.

Salford City Reds, 2007 – 13 points
Salford should have started the 2007 season full of optimism after finishing fifth the year before, but they made a slow start and in May sacked their coach, Karl Harrison. He was replaced by Shaun McRae and the downward spiral continued.
The City Reds, as they were then, had some proven talent on deck, in the likes of Luke Robinson, Luke Dorn and John Wilshere, plus an emerging Stefan Ratchford. They never got off the foot of the table, however, and finished seven points behind Hull KR in last place.

Crusaders, 2009 (6 points); 2011 (8 points)
A strange one, this; two wooden spoon seasons separated by one in which they made the play-offs. But then Crusaders always were a strange club.
As the Celtic Crusaders, they featured a number of players who went on to bigger things elsewhere, including Matty Smith (on loan from Saints), Jason Chan, Gil Dudson and Ben Flower.
Their highlight was a win over Wigan, but they managed just two other victories and finished eight points adrift of 13th placed Salford.
The following year, playing out of Wrexham under the coaching of Brian Noble, they were a very different proposition, with players like Rhys Hanbury and Weller Hauraki shining and the arrival of the eye-catching Jarrod Sammut. Crusaders finished eighth and were knocked out of the play-offs by a modest 18-12 at Huddersfield.
Reality bit the next season, with just four wins, last place and implosion at the end of the season. Players like Sammut, Chan and Hanbury got out before the ship went down. The club the rose out of the ashes as North Wales Crusaders in Championship One.

Castleford Tigers, 2004 – 12 points
Cas had finished a respectable eighth the previous year, but little went right for them in 2004. Graham Steadman was sacked as coach after a few games and replaced by Gary Mercer, with Ellery Hanley as coaching consultant.
Their great hope on the field, Paul Newlove, retired after five games because of a foot injury and the Tigers never got out of last place after April. A 7-6 win over fellow relegation candidates Widnes gave them late hope, but defeat by Wakefield sent them down.

Huddersfield Giants, 1998 (4 points); 1999 (10 points); 2000 (8 points); 2001 (13 points)
In terms of sustained back-marking, the Giants should be at the top (or bottom) of this list. No-one can compete with their record of four wooden spoons in a row.
The difference was that Huddersfield, as they have proved since, were imperceptibly moving in the right direction.
In 1998, Garry Schofield, Phil Veivers and Malcolm Reilly all had a crack at coaching them, all to no great effect.
Apart from a couple of weeks in mid-season when they beat Warrington and Castleford, the Giants couldn’t buy a win. Their paltry return of four points saw them nine adrift of Salford.
Things weren’t much better in ’99, with just five wins and a humiliating 86-8 defeat at Leeds. However, they only finished behind Hull on points difference, conceding a mighty 1011.
The Frankenstein monster that was the Huddersfield-Sheffield Giants was just as bad. Under the coaching of John Kear, they beat Wakefield three times and, in a real shock, Warrington, but that was it.
They finally went down in 2001, with Tony Smith at the helm. They made the crucial decision to retain both him and a full-time squad, bounced back the following year and the rest, as they say, is history.

Paris St Germain, 1996 (7 points); 1997 (12 points)
PSG never finished bottom of Super League, but it took an enormous amount of propping up to get them into next to last position in their two seasons of existence.
Their undoubted highlight was their first match, a 30-24 win over the Sheffield Eagles in front of almost 18,000 at the Charlety Stadium. You could say it was all downhill from there, as they beat only Workington and London over the rest of the season.
Their second and last year saw them slightly more competitive on the field after Andy Goodway took over as coach from Peter Mulholland.
Off the field, however, they were a complete shambles, with most of their players on the wrong sort of visas and not, in theory, allowed to play.
In the end, it was no surprise when the plug was pulled on them at the end of the 1997 season.

Oldham Bears, 1997 – 9 points
After a decent first season in Super League, Oldham fell apart in 1997. Despite the presence of experienced players like Martin Crompton and Francis Maloney, they were simply not up to the job.
Bob Lindner’s appointment as coach was not a success and their most consistent performer on the field was their bear mascot.
When they went down, never to return, he was a notable casualty as they reverted to being known as the Roughyeds.

Workington Town, 1996 – 5 points
When people philosophise about the desirability of having a Cumbrian team in Super League, they conveniently ignore the fact that they once had one – and it almost killed them.
The dubious honour of finishing last in the first season of Super League went to Workington. They won only two matches all season and disillusionment set in early.
One damning statistic is that they averaged a mere 2,322, not only less than in the transitional season, but less than in the old Second Division two years earlier.
If Cumbria wanted Super League, it had a funny way of showing it.
Among the notables who pulled on a Workington shirt that ill-fated season were the Welsh prop, Rowland Phillips, and a fresh-faced young Tony Smith, beginning his acquaintance with the wooden spoon position.

Leigh Centurions, 2005 – 5 points
On the night the competition came to Hilton Park, the ground announcer roared out the question: “Are you ready for Super League?”
The only honest answer would have been: “Er, no, can you come back in a few weeks.”
It sounds like a joke, but Leigh really did have to buy an extension cable from the DIY store next door before the floodlights would work.
Leigh never got up to pace with Super League, winning just two games and leaking a massive 1,210 points.
It was hard for any individual to shine, but Australian prop Craig Stapleton was their most consistent performer, whilst making his first appearance off the bench was a certain Chris Hill, later of Warrington and England.
Graffiti appeared on the wall at amateur club Leigh East’s adjacent pitch. “Living the Dream,” it said. Nightmare, more like.

Halifax, 2003 – 0 points
This is the point at which the likely winners start polishing their acceptance speech, especially the section about how they never expected it. But really, it had to be Halifax, didn’t it?
Beset by financial problems, they had made backroom staff redundant and cut playing terms at the end of the previous season. Some of the players they had signed voted with their feet by simply not turning up.
And yet it all started so well, with a shock defeat of a well-fancied London side in the opening round. It was the only win of the season, during which they haemorrhaged 1,227 points.
But even that glory was taken away from them when they were deducted two points for salary cap breaches.
Worse than that, Stephen Pearson, the acting chief executive who had doNe more than anyone to save the club, died of cancer.
One good thing came out of it. Before the start of the season, Halifax dropped their unloved Blue Sox nickname, so they at least went down with a proper name.

This article originally appeared in Rugby League World magazine, the UK’s most popular monthly Rugby League publication. You can learn more about the magazine here, read some more of its content on this page, and find out how you can get hold of it by clicking here. You can also follow the publication on both Twitter and Facebook.