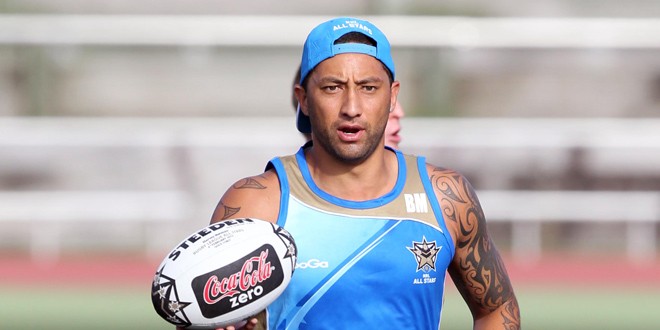 The agent of Kiwi legend Benji Marshall has confirmed his client will not be keeping a promise he made to Wests Tigers last year.

When he swapped codes in July, the 29-year-old promised his club of 10 years that, if he were to return to Rugby League, he would not join another club in the NRL. He said: “I will honour my words about not playing for another NRL club. There is no other NRL club for me to play for. The Tigers are my home and will always be my home. I have seen guys like Mark O’Neill leave, go to England and then come back to the club. I am hoping to do the same in some capacity after I retire.”

Marshall revealed his intent to return to Rugby League on Monday. Martin Tauber, who represents Marshall, told News Corp Australia earlier today: “That comment he made was probably made at the wrong time. It won’t exist.”

He also confirmed talks are yet to start with any interested club, adding: “There has been speculation about Cronulla, I have never spoken to [Sharks officials] Steve Noyce or Darren Mooney or any of them. We have not spoken to anybody. This all only took place yesterday morning and we weren’t anticipating or planning anything.”