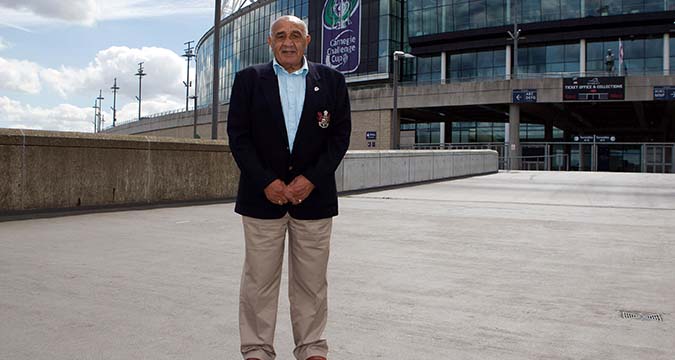 Welsh Rugby League greats Billy Boston (pictured), Gus Risman and Clive Sullivan, all members of the Rugby League Hall of Fame, will be immortalised in a statue in their home city of Cardiff.

The trio, who will be recognised many years after making successful transitions to Rugby League, will represent a group of players known as the Cardiff Bay Codebreakers, who headed to the north of England after switching codes.

The project ‘One Team – One Race, Honouring the Cardiff Bay Rugby Codebreakers’, was launched in September, giving members of the public the opportunity to nominate three of 13 players who would feature on a statue.

Boston, Risman and Sullivan won the vote and a seven-strong panel of experts that included former players Jim Mills and Jonathan Davies agreed that the trio would now be immortalised on a statue that will represent all the players who headed north from the Cardiff Bay area to star in Rugby League.

The plinth that will house the statue will also remember the other ten players.

Boston, now aged 86, played for Cardiff Schools, Boys Clubs of Wales, Wales Youth and Neath in rugby union before signing for Wigan while still a teenager for £3,000. He went on to score 478 tries in 487 matches for Wigan and also won the World Cup with Great Britain, playing in 31 Tests and becoming the first black tourist in Australia. He also played for Wales.

Risman, who has streets named after him in Salford and Workington, captained the Welsh rugby union team in wartime internationals, despite being a Rugby League legend. He played in 17 Test matches for Great Britain and won 18 Welsh caps.

Both Boston and Risman also feature on the Rugby League statue at Wembley that was unveiled in 2015.

Sullivan, born in the Cardiff suburb of Splott, became the first black captain of any British international rugby team, leading Great Britain to the 1972 Rugby League World Cup title. He had joined the Army from school and eventually joined Hull FC before switching to Hull Kingston Rovers. He won 17 caps for Great Britain, and the main road into Hull was named ‘Clive Sullivan Way’ in his honour.

Almost 14,000 members of the public cast their vote to decide which players would be represented on the statue.
Fundraising has already begun to raise more than £300,000 to erect the statue in the Cardiff Bay area, with organisers hoping they will be able to erect it within the next two years.