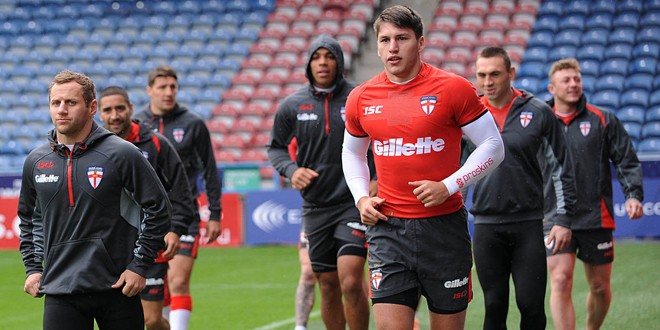 If you were the England boss, and you were asked to pick a side today, completely based on form and without any bias, who would you select?

Here’s who I would go for along with reasons why and a back-up choice for each position. I’ve compiled my list using official Super League statistics and League Express reports from every Super League game this season. Let me know if you agree – or not! – by commenting using the form below or joining the debate on social media.

Full-back
Zak Hardaker
Leeds Rhinos
Why? Because he is without doubt Super League’s best player on current form. So far this year he has scored six tries, assisted seven more and leads the league in tackles bust (48) and metres gained (1,696).
Second choice: Jonny Lomax (St Helens) has four tries, nine assists, 37 bust tackles and over 1,300 metres.

Left wing
Ryan Hall
Leeds Rhinos
Why? He’s probably the world’s best winger. Fast, strong, clever and hard-working, he’s scored 11 tries so far this season and strikes fear into the heart of opposition defences.
Second choice: Joe Burgess (Wigan Warriors) has been a revelation for the reigning double champions and has a tremendous future ahead of him.

Leftt centre
Michael Shenton
Castleford Tigers
Why? Still only 27, Shenton has scored nine tries and assisted a whopping 10 more in 2014. He averages over nine metres per carry, too. Experienced and skilful, he is most probably the country’s second best centre on current form.
Second choice: Leroy Cudjoe (Huddersfield Giants) has failed to replicate the form that saw him start for England at last year’s World Cup but he’s experienced, powerful and fast. He’s scored three tries this season and assisted six others.

Right centre
Kallum Watkins
Leeds Rhinos
Why? He’s the best centre in England. Fast, strong and a good finisher, he has it all. In 2014, he has scored five tries and assisted eight others, while also making nearly 1,300 metres.
Second choice: Jack Reed (Brisbane Broncos) is a class act and brings with him NRL pedigree. 20-year-olds Mason Caton-Brown (London Broncos) and Dan Sarginson (Wigan Warriors) also deserve special mentions.

Right wing
Thomas Makinson
St Helens
Why? He’s the most prolific try-scorer in the league this year, having crossed the whitewash 13 times. If we’re picking on form he’s one of the first names on the team-sheet.
Second choice: Tom Briscoe (Leeds Rhinos), with eight tries of his own in 2014, is arguably a better first choice given his successful partnership with Kallum Watkins, but Makinson is in better form.

Stand-off
Gareth Widdop
St George-Illawarra Dragons
Why? He’s the best English-born half-back at McNamara’s disposal, without a doubt. Had he played throughout the RLWC2013 campaign, you can’t help but think the team could have gone further.
Second choice: On current form, Kevin Brown (Widnes Vikings) would be high on the list, but given he is nearly 30, you have to think McNamara should be looking to bring more youth through. Therefore, I’m going with Marc Sneyd (Castleford Tigers). The 23-year-old is in great form this year and has 15 try assists, one four-pointer of his own, and 39 goals.

Scrum-half
Sam Tomkins
New Zealand Warriors
Why? Anyone picking an England side right now is in a tough position. That’s because it seems impossible to leave out either Zak Hardaker, who is in incredible form, and Sam Tomkins, who is among the world’s best players. They’re both fighting for the same position so something had to give. I decided to pick Sam at scrum-half as he possesses the skill, ball handling and vision to excel there. Also, I’m not sure we have anyone at our disposal who could do a better job.
Second choice: Trent Hodkinson (Canterbury Bulldogs) is on the fringes of playing for New South Wales in the State of Origin but has made clear he wants to play for England. Both James Graham and Hodkinson’s English dad have urged McNamara to give him a chance.

Openside prop
James Graham
Canterbury Bulldogs
Why? Is there a better English prop forward? I don’t think so. Hard-working, strong and clever, he’s got it all.
Second choice: Chris Hill (Warrington Wolves) has been in good form despite the team around him struggling. He’s one of the league’s most effective tacklers (making 358 and missing only five), has made 185 carries, 1,403 metres and assisted one four-pointer.

Hooker
James Roby
St Helens
Why? A look at the stats reveals all. Only one person has made more tackles than him in 2014, he’s scored three tries, assisted seven, made more carries than all but one person in Super League, made over 1,300 metres, has only four errors and four penalties to his name, and has made 192 runs from acting half. Simply put, he’s the best hooker in Europe and up there with the best in the world.
Second choice: Daryl Clark (Castleford Tigers) is in scintillating form and many are tipping him to be the next Roby. This season he’s scored six times, assisted twice and made over 1,200 metres. At 21, he has a bright future ahead of him.

Blindside prop
George Burgess
South Sydney Rabbitohs
Why? Although he’s been suspended on more than one occasion in 2014, there’s no question that Burgess is one of our country’s most promising and effective front-rowers. He regularly starts for South Sydney and doesn’t stop running. Also, the experience he gained at the World Cup will help him no end on the international scene.
Second choice: Alex Walmsley (St Helens) is certainly among the best props in Super League on current form. A strong runner with good hands and stamina, he is shaping up to be the next Jamie Peacock.

Second-row
Liam Farrell
Wigan Warriors
Why? He’s a complete player – scores tries (he’s got seven this season), makes them, is superb in defence and doesn’t stop taking the ball in. The best second-rower at England’s disposal.
Second choice: Elliott Whitehead (Catalan Dragons) was the French club’s top scorer (with nine tries) before full-back Morgan Escare bagged a hat-trick last week. A former Bradford product, he’s got it all and is only 24.

Second-row
Carl Ablett
Leeds Rhinos
Why? I’ve got a feeling this one is going to split opinion but the truth is, on current form, there are few better English second-rowers. If you watched Leeds take on Wigan last week Ablett you will have noticed he was a genuine a threat whenever he had the ball thanks to his ability to free his arms and offload. He is extremely versatile, too, and can fill in at centre and stand-off if required.
Second choice: John Bateman (Wigan Warriors) is surely going to be the first name on the team-sheet in five years. Right now might be a touch too early for the 20-year-old but he has proved he has what it takes in every department.

Loose forward
Sean O’Loughlin (captain)
Wigan Warriors
Why? He is possibly the most influential player in Super League. Without him, Wigan look lost. A natural leader, this season he has scored four tries, assisted twice, and hasn’t made a single error.
Second choice: Joe Westerman (Hull FC) is in the top 10 for several of Super League’s stat categories, including carries made (1st, 230), tackles (5th, 395) and metres (9th, 1,355). He’s also assisted five tries.

Notables who missed out
Sam Burgess (South Sydney Rabbitohs) is still arguably our best player but his move to rugby union means there’s no point picking him.

Jamie Peacock (Leeds Rhinos) doesn’t want to play for England again despite being the best prop in the league. What a shame.

Josh Charnley (Wigan Warriors) has been struggling with injury for much of the season but looked ordinary when fit. May struggle to get his club spot back.

Kevin Sinfield (Leeds Rhinos) is certainly among the most experienced and reliable players at McNamara’s disposal, but he is 33 and doesn’t have many more internationals in him. Time to plan for the future.

Rangi Chase (Salford Red Devils) has hinted he’s turned his back on England. Either way, I’m not certain he is the best fit for the national side.

Ben Westwood (Warrington Wolves) would certainly be in with a shout if fit, but has struggled with injury in 2014 and is therefore unable to get in this list.

Michael McIlorum (Wigan Warriors) is highly rated by many, but for me he is not in the country’s top four hookers.

Brett Ferres (Huddersfield Giants) picked up a lengthy suspension for dropping Jonny Lomax on his head in the Challenge Cup. He would probably stake a claim for one of the second-row spots but didn’t do enough prior to his ban to convince me.

Rob Burrow (Leeds Rhinos) has been a great servant for the national side but I think it’s time for him to concentrate on his club like Jamie Peacock and Gareth Ellis have done.

Lee Mossop (Parramatta Eels) hasn’t played a game in 2014 so can’t be counted, though I’m sure he would make a good case for inclusion if fit.

Gareth Hock (Salford Red Devils) has publicly criticised Steve McNamara but I’m not sure it matters as I doubt he would get in the side on merit alone.

Do you agree? What changes would you make? Let us know by joining the debate on social media