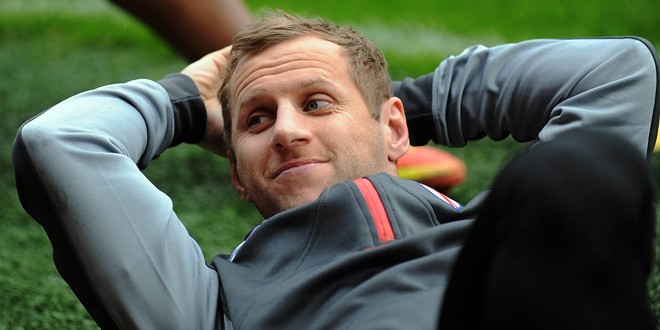 Leeds Rhinos convincingly swept aside St Helens to progress into the quarter finals of the Challenge Cup yesterday, but their success came at a cost.

Indeed, stand-in hooker Rob Burrow, 31, left the field in the 64th minute with a broken collarbone – an injury that is likely to see him spend nearly three months on the sidelines.

“He’s broken his collarbone so that’s not good,” Rhinos coach Brian McDermott said post-match, confirming afterwards that the England and former Great Britain international could be out of action for 12 weeks.

The blow leaves the Leeds boss in a precarious position. First-choice number nine Paul Aiton has nine weeks of a three-month medication course to complete before he can return, while former stand-in Paul McShane joined Wakefield in pre-season.

“There are some things going around in my head at the moment but I’ll have to give that some thought.” – Leeds boss Brian McDermott when quizzed on his plans to replace Burrow.

Thankfully for McDermott, he has a versatile squad at his disposal, and there are options. Captain Kevin Sinfield, with a wide range of skills compatible with hooking, will surely be asked to fill in at nine, leaving the coach with a much easier task of finding a new half-back for the next couple of months.

It could be a great opportunity to blood young talent Liam Sutcliffe some more, leaving everything else as is. However, there is also a strong possibility that full-back Zak Hardaker, who was tested out in the halves by McDermott in Leeds’ Boxing Day bout with Wakefield, could come in at scrum-half, allowing Ben Jones-Bishop a few weeks in his preferred position.

Two less likely options include making a loan signing or bringing an academy youngster through.

If you were Brian McDermott, which way would you go? Let us know by commenting below or joining the debate on social media.