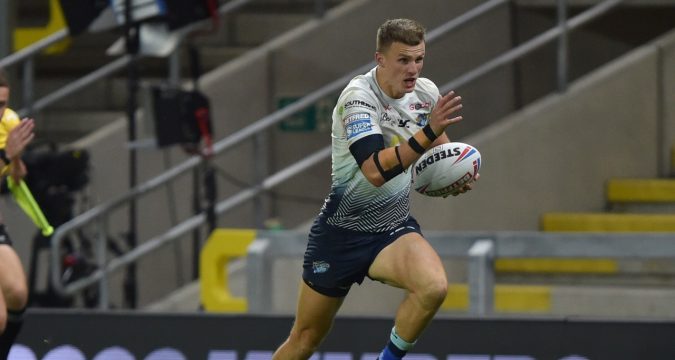 This week is proving to be a very good one for Leeds Rhinos winger Ash Handley.

As well as overcoming from a knee injury sustained in pre-season and returning to action againstHull KR on Friday, Handley has also agreed a contract extension that will keep him at the club until at least the end of the 2024 Betfred Super League.

Handley made his debut for the Rhinos back in 2014 having come through the club’s academy system and has since gone on to score 78 tries in 124 appearances for the club. Twenty of those tries came last season as he ended the year as top try scorer in Super League in 2020.

“I was delighted to be offered a new deal and happy to have extended my contract with my home town club,” said Leeds-born Handley, who is a member of Shaun Wane’s England squad ahead of the Rugby League World Cup.

“I was under contract until 2023 anyway but having spoken to Kevin Sinfield, the club have always looked to reward players who do well with new deals and it has been nice to have that recognised.

“I am excited to be back involved in the team. The injury was frustrating as I wanted to be on the field but it has given me a chance to work on a few things and I just can’t wait to get started.

“It is a big year for all the English players in Super League with a home World Cup on the horizon at the end of the year and I will be going out to do my best for Leeds every week to try and put myself in contention.”

Director of Rugby Kevin Sinfield added: “We are pleased to be able to reward Ash with a new deal. He has been a shining light for the team over the last few seasons and is one of the best in the world in his position. We believe he is ready to move onto the next level of his career in the coming years and I am delighted he will do that as a Rhino.”