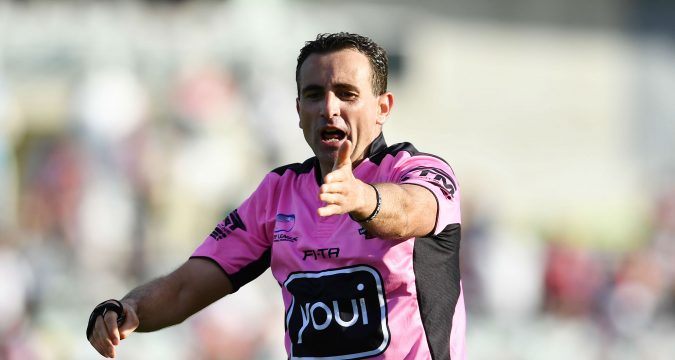 The NRL official has been given the nod over Matt Cecchin after impressing during the World Cup semi-final between Australia and Fiji.

Sutton, 37, will be assisted by Super League match officials Chris Kendall and Ben Thaler, who have been given the roles of touch judge and video referee respectively. Australian Chris Butler is the other touch judge.

Since his debut in 2009, Sutton has officiated 226 NRL games while he has taken charge of the last 10 State of Origin games, plus this year’s grand final.

“It was obviously a difficult decision to pick the referee for the [men’s] final after Matt Cecchin’s and Gerry’s excellent performances in the semi-finals and throughout the tournament but I’m confident were have chosen the right person to do job,” said the RLWC head of officiating Tony Archer.

“I’ve been very satisfied with the performances of our officials and we will certainly continue to see the benefits of having the opportunity to bring refs together from the northern and southern hemispheres into camp and learn from each other in such an environment for the first time.

“It has allowed us not to just deliver high level of officiating in this tournament but to also bring in some younger refs with a view of progressing to the 2020-21 Rugby League World Cup.

“It has certainly helped achieve the best performance at international level in such a competitive tournament to have by having them in camp with access to a full coaching and support structure with medical and physical facilities around them.

“Those referees have gained experience not only at Test level but in sharing knowledge and feedback with each other.”