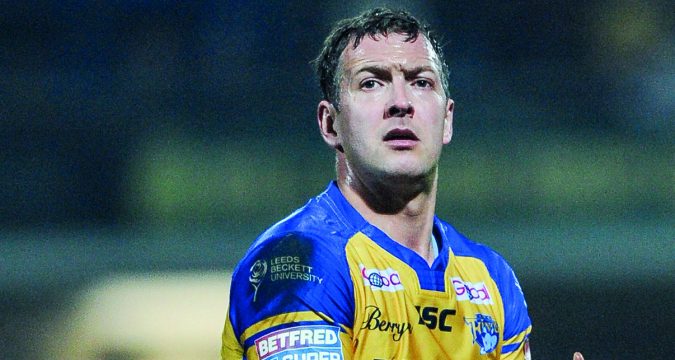 Danny McGuire will put personal friendships to one side this weekend as he becomes only the third man to lead Leeds out in a Super League Grand Final – something he describes as a “huge honour” in his final game for his hometown club.

McGuire’s Leeds career will finish on the biggest stage of all before the heads to Hull KR in 2018, as he captains the Rhinos in Saturday’s Grand Final against Castleford.

And he admits to follow in the footsteps of Kevin Sinfield and Iestyn Harris as a Leeds captain in a Grand Final is something he does not regard lightly.

He said: “It’s a huge honour and something I never took for granted. It’s a real privilege to be captain of this club; we had a brilliant one for years in Kevin but for an opportunity to do that myself is really special.

“I want to thank all the lads for their commitment because it’s been second to none.”

However, McGuire will face more than a couple of familiar faces this Saturday.

His former Leeds team-mates, Zak Hardaker and Paul McShane, will be on the Castleford side – as will his close friend, Tigers and England scrum-half Luke Gale.

“Luke was in the Academy when he was and I never got the opportunity to play with him, but we’re good friends and we go for breakfast in the same cafe, amazingly,” he laughed.

“I’m good friends with Paul McShane too but in these games, you put your friendships aside to do the job for your club. We’ll have a beer together after but we’ll be bashing each other first. I’ll see him in the cafe through the week but I’ll be keeping things close to my chest!”

Castleford have won their last eight meetings with Leeds, but as the Rhinos go in search of their eighth Super League title on Saturday, McGuire admits he holds the Super League leaders in high regard.

He said: “I don’t think we owe them one. We’ve had some good tussles but just not played for the full 80. That’s not good enough against a good team like them because they take their opportunities well and that’s what we’ll be focussing on.

“They’ve been the best team this year and we have played well against them in patches, but if we have a lapse of concentration this weekend we’ll get punished. But we’re looking forward to it.

“There’s been some special times at Old Trafford and we’re up against it, because they’re a great team are Castleford, so they’ll be feeling confident. But we’ve given ourselves an opportunity to do it again and we’ll go there and give it our best shot.

“The setbacks and the disappointments we had last year have spurred us on this year, to be honest. The commitment has been outstanding this year and if we all muck in like we have done this year, we’ll give ourselves a chance.”