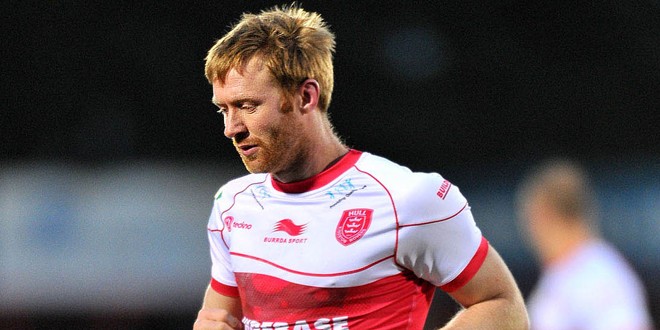 Hull Kingston Rovers have confirmed that former player and current assistant coach David Hodgson has registered as a player for the 2017 season.

The 35-year-old retired at the end of 2014 following a successful career in which he scored 184 tries in 366 Super League appearances.

He remained at Rovers as part of their coaching staff following retirement, but will now make a Jamie Peacock-style return to the field.

Rovers are currently dealing with numerous long-term injuries in their backs, with Matty Marsh and Joe Wardill sidelined for the opening months of the season, while Ben Cockayne and Jake Butler-Fleming are both dealing with injuries too.

He will make his second debut for the club in their pre-season fixture with Hull FC on Friday.

“It’s been two years since I last played which has given me plenty of time to recover and I feel fresh so I’m looking forward to getting back into it.

“I’ve always filled in at training since I became a coach but I’ve stepped that up throughout pre-season and I’ve done a lot of hard sessions with the team. I said to Tim that I would train up until Christmas and see how I went but the body feels good.

“Hopefully I can add something to the mix with my experience and I’ll be available if Tim needs to call on me. The younger kids coming through in the backs are quality players but it always helps to have somebody alongside you who’s played for a long time.

“I’m sure Benny will help with that too when he’s back and if I can support them throughout the year when I’m needed then hopefully it can only be good for the team.

“I’ll be facing Hull FC this weekend and it will be a tough test for us, especially for some of the younger lads. Can you really call it a friendly when it’s a derby? There’ll be Super League intensity to it and hopefully we’ll be there at the end of the year playing against more Super League teams so it will be good preparation for that.”

Head coach Tim Sheens added: “With the injuries to our backs at the moment, we’re a little underdone in that area for the early part of the season. Dave has been covering at training and has been going well, but we certainly don’t expect him to play every game for us.

“Until we finalise our recruitment and get everybody fit and available, Dave has agreed to fill in and we officially registered him today. He’ll do a good job for us and his experience will be useful with our young centres. He’s still got the ability as a player but we’re keen to keep him on the coaching staff as well so we’ll see how he goes.”