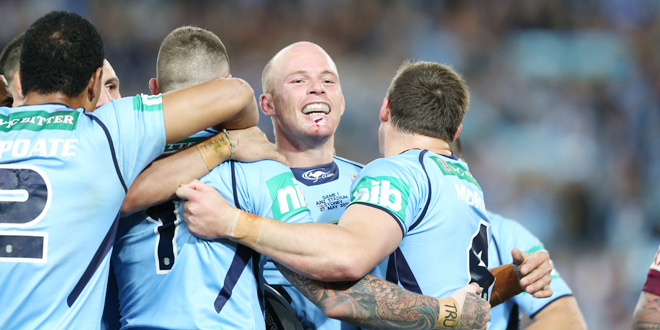 Thirty-eight players from 13 NRL clubs, including Nathan Cleary, Connor Watson and Angus Crichton, have been selected by Brydens Lawyers NSW Blues Coach Brad Fittler (pictured above) in an Emerging Blues squad that will meet in Sydney in January.

The squad is made up of players who could potentially achieve higher honours and State of Origin representation in the near future. The 38-man squad will meet up for the first time at ANZ Stadium on Saturday, 13 January for a session with NSW True Blue Origin legends ahead of the 2018 season.

Andrew Johns, Craig Fitzgibbon, Matt King, Mark O’Meley and Anthony Minichiello will join Fittler and Assistant Coach Danny Buderus at the camp where they will take up specialist positional coaching roles. Whilst they will take part in skills work, the Emerging Blues will also attend presentations preparing the young stars for one of Rugby League’s toughest arenas.

“The majority of these players are young stars already playing first grade, or on their way to the top grade. These players will be the backbone of the NSW Origin team going forward. They all have a big future.

“We’re hoping they get a lot from the Emerging Blues camp, about expectations, and learning from some of NSW Origin’s best former players, who I have played with and really respect.”

The 2018 Emerging Blues squad (in club and alphabetical order) in full: