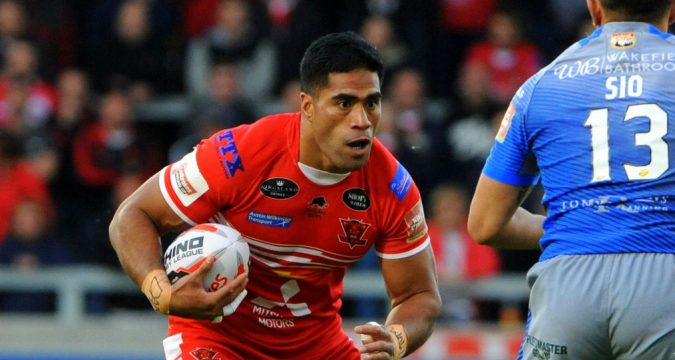 Lama Tasi’s time at Salford appears to be coming to an end.

League Express reported on Monday the forward has been offered to rival clubs after being informed his time at the club is over, despite signing a new deal with the club back in March.

But who could be interested in the former Saints ace? Here are a few potential outcomes.

Given the fairly sizeable exodus that is set to take place at the Vikings and their low-key recruitment up to now, any players available will inevitably be linked with a move to Widnes.

With Jack Buchanan and Manase Manuokafoa leaving spots to fill in their front-row, Tasi certainly fits the bill for what Widnes are in need of moving into next season.

Tasi is robust and aggressive, qualities that any pack in Super League requires to be competitive. With the aforementioned duo gone, Widnes have a big void to fill. But they could do worse than the 27-year-old.

The Robins are another club thought to be on the lookout for a prop ahead of their return to Super League.

Tasi again fits the bill and the Robins, and the Tongan international would add something a bit different to what Tim Sheens already has at his disposal.

With plenty of Super League experience under his belt, Tasi also has quality, as proven during stages of the most recent campaign.

The Centurions squad is uncertain right now, and with that, they will be considering all the options available to them.

As contract negotiations continue, players will come and go. The likelihood is that new faces will have to come through the doors at LSV.

If Leigh could lure a man of Tasi’s ability, their Super League push would be heading in the right direction.

The big-spending French side is making a big push for the top four of the Championship in 2018, and Tasi would only help aid that.

Sam Rapira has already been drafted in to add further firepower to their pack, and Tasi would only further add to that with his aggression.

His style of play would be welcomed by their French faithful and it could prove to be a fine move.