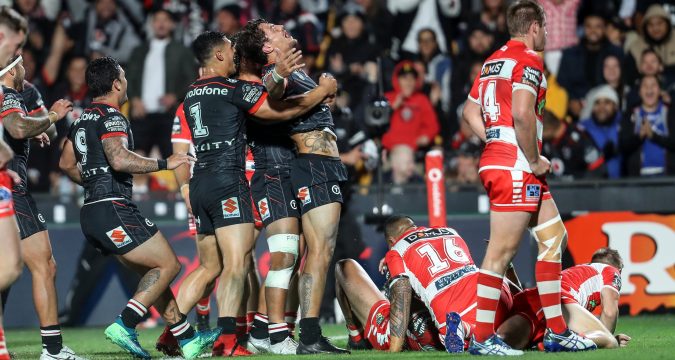 The Warriors made the perfect start. The ball was shifted left to right, including a great tip on from Adam Blair, and Mason Lino beat his marker Gareth Widdop to scamper across the whitewash.

Matt Dufty almost created a try for Nene MacDonald but the winger couldn’t collect Tim Lafai’s quick pass. Euan Aitken then tested former Wigan centre Anthony Gelling in his first NRL start of the season, but Gelling was up to the task.

St George were having plenty of possession near their opponents’ line which forced the Warriors to give away penalties to keep the Dragons at bay. After five penalties, given away near their own line, the Warriors were put on a team warning but continued to survive.

Two former Wigan players combined in Blake Green and Gelling to extend the Warriors’ lead to ten with only four minutes to go in the half. But Green was to be binned shortly after. The standoff had been penalised many times by the referees in the first half and he went one penalty too far.

Just before Green returned, Ben Hunt fooled Sam Lisone with a dummy, stepped past Roger Tuivasa-Sheck and managed to get the ball down despite the attentions of Isaac Luke and Peta Hiku.

The Dragons almost took the lead when a Ken Maumalo pass was intercepted by Tim Lafai but James Graham and St George were pulled back for a knock on in a contest with Tuivasa-Sheck.

Luke was having a great game and he kicked a 40/20 to set up his own try. The hooker jumped straight from dummy half and muscled his way past Dufty.

Tariq Sims earnt St George a way back into the game with seven to go when he hit and spin off a Cameron McInnes pass from dummy half.

But Isaiah Papali’i finished the game off. A Lino kick was taken by Tuivasa-Sheck, he flung the ball back to Adam Blair and the ball found its way to Papali’i who had an easy finish.